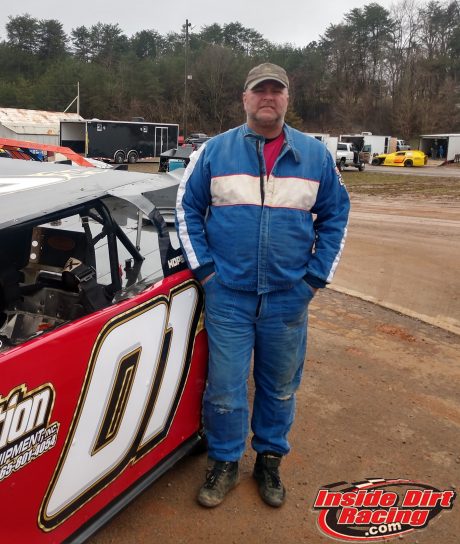 Weekly Racing Heroes will be a regular feature on InsideDirtRacing.com throughout the 2019 racing season. These pieces will focus on drivers in east Tennessee who race on a weekly basis at the tracks of this region. Here, drivers will answer three questions that will provide fans with a look into the lives of their favorite weekly competitors.

The 44-year-old veteran racer can often be seen running at the front of the pack in the Modified Street class at 411 Motor Speedway and other tracks around east Tennessee. Not only does he enjoy racing but he appreciates the friendships made though racing.

What got you started in racing?

“It was lucky by accident. I was working on open wheel cars for Duayne Hommel who raced Late Models and his granddaddy owned the Bulls Gap race track. That’s when the rules for claiming motors was popular so I ran in the back for a couple of races so I could claim his motor if he won. A few weeks later he told me to just drive it and don’t worry about it and I ran second. So from then on I’ve raced on and off.”

What is the goal you want to achieve in racing?

“I just want people to remember that I was a decent race car driver.”

What keeps you coming back week after week?

“Mostly a car to drive. I ain’t going to do it if I have to spend my own money. And I’ve raced with some good people. I’ve raced with Skimp Henry for years and years and he still does it from time-to-time. I just like it. Most of the time you’ve got the same crowd to a certain point. It’s good for everybody. It’s gets you away from the house too.”