A number of noteworthy happenings took place this past weekend in the World of Outlaws Morton Buildings Late Model Series double-header weekend at the Volunteer Speedway in Bulls Gap, TN. Here are a few of the things that caught our attention:

Is Scott Bloomquist back? – After an early portion of the season in which Hall of Fame driver Scott Bloomquist has not looked like his usually competitive self, the leader of Team Zero turned in two solid performances. Although neither of those performances led to victory, it did appear as if the No. 0 operation has taken a step in the right direction.

On Friday night, Bloomquist was third in his qualifying group then went on to win the first heat race of the evening. The redraw then placed the former WoO Late Models champion on the pole for the feature. However, the No. 0 battled steering/handing issues throughout the 50-lap affair but ‘Black Sunshine’ still brought home a solid fifth place result.

Saturday night proved to be another good night for the many fans who came to cheer on the Mooresburg, TN racer. After posting the sixth fastest time in his qualifying group, Bloomquist finished second in his heat race. The redraw placed him sixth on the starting grid which led to the Team Zero Race Car running within the top-5 most the night on its way to a fourth place finish when the checkered flag waved.

We’re not necessarily used to seeing Scott Bloomquist show improvement by simply running within the top-5. But after some struggles in this early season, his team looked much better this weekend. Perhaps racing close to home for a couple of nights was what Bloomquist needed to get back in the groove. 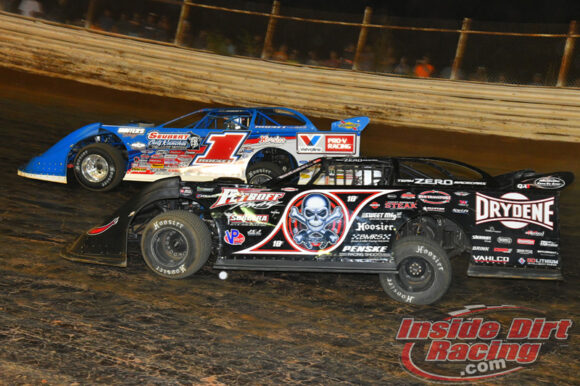 Scott Bloomquist(0) raced among the front runners on both nights

Thug Nasty departs early– Logan Roberson picked up his first career Super Late Model win at West Virginia’s Tyler County Speedway during a made-for-PPV event with no fans in the grandstands during the coronavirus shutdown. Almost certainly, the young Virginia native rolled into Bulls Gap anxious to test himself against the national touring stars who travel regularly with the WoO Late Models circuit. However, things went awry early in the weekend for the driver known as Thugg Nasty.

After a Friday night qualifying effort that would have placed the No. 17 Rocket Chassis machine on the front row for a heat race, a penalty was handed down by WoO Late Model Series officials that took away Roberson’s fastest lap and left him with his slowest lap to stand on. That effort would have had him starting at the rear of a heat.

According to series officials, a directive had been given to the drivers to turn into the infield following their qualifying laps at a particular point on the track. Roberson missed that opening and instead entered at the next break in the wall. The penalty for taking an extra lap in qualifying, and they considered missing the entrance to the infield the same as taking an extra lap, was to lose the fastest of the driver’s two laps.

Obviously Roberson did not agree with the ruling so he loaded his car and left rather than starting the heat race from the rear, as he explained in the following Twitter post:

We’ve made the decision to load up our car and head somewhere else for the weekend. We just can’t agree with the decision that led to us losing our 4th place qualifying effort.

We will update you all when we decide on where we are headed.

Kyle Strickler deflated– Perhaps one the most impressive driving performances of the weekend was that of Kyle Strickler during the Friday night feature. After winning his heat race, the No. 8 machine started alongside Scott Bloomquist on the front row in the main event. The former Modified standout then took the lead away from Brandon Overton just before a lap 6 caution.

During that caution period it was apparent that Strickler was riding on a flat left front tire. He then proceeded to maintain his lead until lap 27. He then slipped back through the field until mechanical issues ended his night just four laps from the finish.

After turning in a remarkable effort, Strickler had only a 15th place result to show for it. 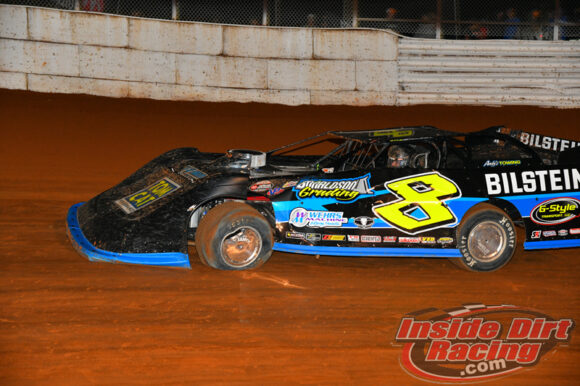 Feast or famine for Overton– Brandon Overton is in the midst of a truly remarkable season that has seen him garner a total of nine checkered flags to this point. At the same time, however, his team has also suffered through nine finishes outside the top-15 brought on by seven results listed as ‘DNF'(Did Not Finish).

Friday night provided a classic example of the Wells Motorsports Longhorn Chassis team’s feast or famine type of runs. Starting the feature from the fourth position, the No. 76 shot to the early lead at the start. After trading the lead a couple of times with Kyle Strickler, Overton found himself at the front of the field after a lap 27 restart and apparently on his way to another victory. However, mechanical gremlins surfaced shortly thereafter and another DNF was added to the total.

Overton had to settle for a 17th place result. 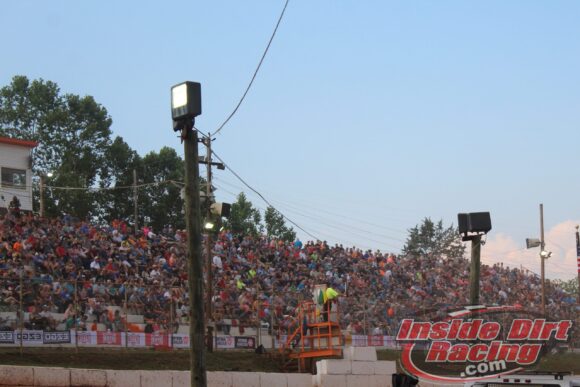 The grandstand was packed on Saturday night

Huge crowd on Saturday– For the second consecutive weekend, an east Tennessee race track announced that it was playing host to the largest crowd in its history. Smoky Mountain Speedway in Maryville, TN experienced that very thing last weekend when it staged a Lucas Oil Late Model Dirt Series event. And after a rain threatened Friday evening that saw a good but not necessarily great gathering assemble, the Volunteer Speedway packed in a record number of people into its grandstands and pit area on Saturday night for the World of Outlaws Morton Building Late Model Series.

Fans from near and far are taking advantage of Tennessee’s open policy in regard to race tracks.