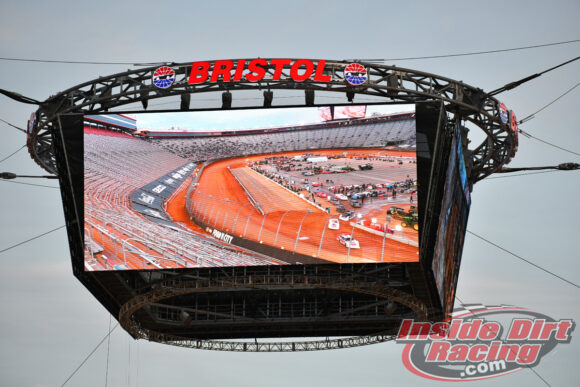 One trend anyone watching probably picked up on during the Tulsa Shootout and the interviews shown by FloRacing.com following the heat races is that the giant video screens now being used by different tracks or by the various streaming services that cover dirt racing is that drivers have learned to use those boards to their advantage. Virtually ever racer who was interviewed in the SageNet Center in Tulsa, Oklahoma has talked about how he/she used the video shown inside the arena to see where the competition was running and how to adjust their racing line in reaction to what they saw.

As most fans of dirt racing know, spotters do not talk to drivers via two-way radio communication as is the case in NASCAR. Further, most forms of dirt racing do not allow the use of rearview mirrors. As a result, blocking is not easy as drivers have to rely on their senses of feel and hearing to know where trailing drivers might be.

However, that has been changing over the past couple of seasons or so. Kyle Larson mentioned numerous times throughout the 2021 season that he used the large video screens to gain an advantage by noting what line other drivers were using to make up or lose ground. He also points out that his use of that video helps to ascertain when an attempt to pass might be coming and where it might be coming from.

The DirtVision.com streaming service, which airs live broadcasts of the World of Outlaws Morton Buildings Late Model Series, the World of Outlaws NOS Energy Drink Sprint Cars Series and the Drydene Xtreme DIRTcar Series among others, has a truck dedicated to bringing a large video screen to the tracks where they are covering events. Along with providing video coverage that can be viewed from a living room, those travelling video screens offer fans in the grandstands the benefit of replays and other features. But at the same time, racers have learned how to use those services both before and after their races but also during the event while ripping around the track at full speed.

While never intended for competitive use, video screens used at both indoor and outdoor venues have become useful tools.

So like it or not, the video screens placed around dirt tracks hosting major events have come to serve as unintended spotters for the drivers, at least for those who run up front and are being followed by the cameras. But the thing is, those screens are meant to add to the fan experience at the track. More, those video boards are meant to serve as an advertisement for whichever streaming service is employing it at that particular track in hopes that fans who see it will go home and order that service because they liked what they saw.

Twenty years ago no one could have ever expected that giant video boards would be placed at dirt tracks. And more, no one would have ever imagined that live streaming video would play a part in the actual competition on the track. But that’s the technologically-based world we now live in. As we have seen over the past few decades, once new technology comes, it rarely goes away.

That said, the at-track video screens are both cool and useful to fans so they shouldn’t go away. If competitors have learned how to use them to their advantage, then so be it.