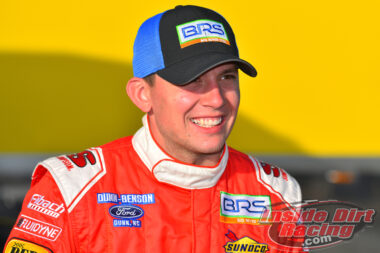 Devin Moran has had a very strong SpeedWeeks. During the latter part of January and the first half of February have demonstrated that the driver of the Tye Twarog Longhorn Chassis can be a threat to win every time the car rolls onto the track. He ended his time in Florida with the Lucas Oil Late Model Dirt Series standing third in points. Although he had no feature wins in those nine races, he did have five top-5 finishes along with solid qualifying and heat race performances.

Moran’s crew considered returning to their home shop to prepare for the remainder of the LOLMDS season. However, they instead took an unexpected trip to Volusia Speedway Park to compete with the World of Outlaws Morton Buildings Late Model Series.

“We weren’t sure we were coming here,” Moran pointed out in a DirtVision.com interview following a heat race win at Volusia earlier in the week. “It was kind of a last minute decision but it’s working out so far.”

Thursday night’s rain delayed feature did indeed show that he can win as he scored a victory in the $10,000 feature that ended just after 1:00am. The Dresden, OH native expressed his relief at finally getting a win and the coveted alligator shaped trophy that comes with a Volusia victory.

“Man, this is awesome,” Moran declared. “We’ve had such a fast race car all week and we just haven’t been able to quite get there. I was kind of bummed when I got that pill draw(5th). Congrats to the track crew because they did an awesome job when we got rain and I honestly didn’t think we were going to race. Everyone back there was complaining, not wanting to race, but we’re here to race and that’s what we were going to do. This was probably the raciest it’s been all week. It’s awesome to finally get a gator. We didn’t even know we were coming here and it’s all happening so it’s pretty cool.”

That win along with two other podium finishes from this week have placed Moran at the top of the DIRTcar Nationals standings over Bobby Pierce.

“Like I said, our car has been fast all week,” Moran described that he leads his friend in the competition for the big Gator trophy to be awarded at the end of the week. “We’ve got one win apiece now. Hopefully Mother Nature holds off. God lets us come out here and race and have fun and show out for these fans. I know if we get to race, there are going to be big crowds these next few nights.” 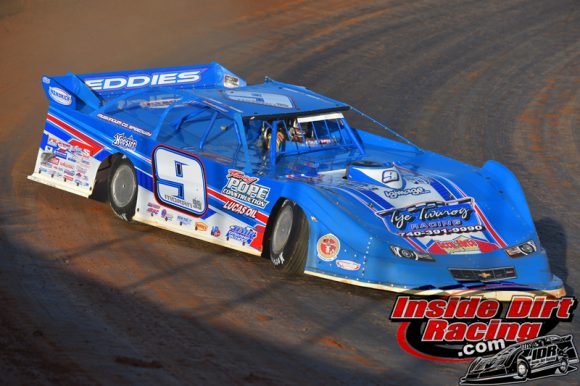 Devin Moran at the wheel of Tye Twarog’s No. 9

An injured wrist from last season caused Moran some discomfort. But the 26-year-old driver says that his improved performance in the early part of this season has less to do with his health and more to do with the performance of his cars. For much of that, he credits his brother and the rest of his crew.

“It really didn’t bother me that much last year, we just weren’t that good,” Moran said of his wrist. “I have to thank my crew. Wylie has been busting his butt all winter long and got these race cars ready to rock and roll. Our whole crew has been working their butts off.”

Although he races regularly on another tour, Thursday’s victory pulled Moran into a tie with his father, Donnie, on the all-time World of Outlaws Late Model Series win list with five. A tie the son hopes will be quickly broken.

“That’s pretty awesome but I’m ready to beat him tomorrow night, hopefully. This Tye Twarog Racing car is bad to the bone.”