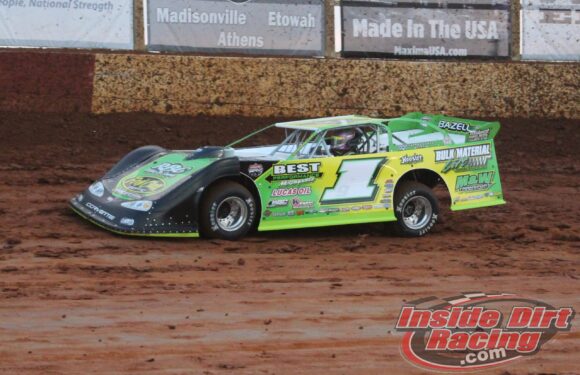 Tyler Erb might not have gotten off to the start he and his team wanted in the early part of the 2022 season but he made up for that on Friday night at Atomic Speedway as he scored a feature win on the first of two nights at this track in what will be a double header weekend for the World of Outlaws CASE Construction Late Model Series.

The Rocket Chassis driver from New Waverly, Texas earned $10,000 from the 3/8 mile clay oval located in Alma, Ohio in a race aired live by DirtVision.com.

A total of 35 cars were signed in for competition.

Feature Re-cap: At the start of the 40-lap feature it was Erb who grabbed the early lead with Rice, Sheppard, Hawkins and Gustin trailing. Moran moved up to take fifth from Gustin. However, a spin by Bruening and Bowersock brought out a caution on the third lap.

Just two laps after the restart, Briggs went for a spin to bring out another yellow flag with Erb still leading, Rice, Sheppard, Hawkins and Moran.

On the lap 5 restart, Erb maintain the lead over Rice and Sheppard with English jumping into the fourth position ahead of Hawkins and O’Neal. The action again paused on lap 10 when Mills spun on the front stretch.

Sheppard moved into the runner-up spot ahead of Rice and English on the lap 30 restart. Further back, O’Neal and Moran engaged in a furious battle for positions in the back half of the top-10. At the same time, Erb began to slip away from the pack.

Just passed the halfway point, Erb continued to lead but Sheppard kept him in his sights as the duo worked through slower traffic. As the laps clicked away, Rice moved in on the top-2 to make it a three-way battle.

Sheppard made a bid on the inside in hopes of taking the lead but Erb fought back the challenge. Sheppard then moved to the high side with seven laps remaining, but again, Erb held his position. Despite a valiant effort by Sheppard, Erb held on to score the victory.

It was the third career WoO Late Models triumph for the Best Performance Motorsports driver.

“I couldn’t really tell where he was making time because I could see him underneath me every time,” Erb said in his victory lane interview with DirtVision.com. “We’d kind of leave even sometimes and sometimes I’d get a better run. After I took the checkered I felt like it was rubbered higher up and he probably entering high and crossing down. Sheppy is a great racer and to be able to compete with him here is awesome.”