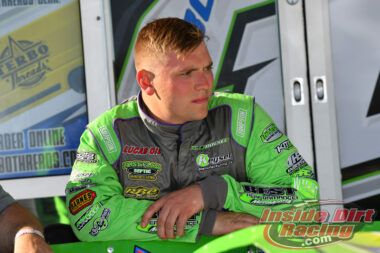 Tyler Erb is currently 6th in the Lucas Oil Late Model Dirt Series standings with five wins and 11 top-5 finishes on that tour alone in 2021. In all, the New Waverly, Texas driver and his Best Performance Motorsports team have visited victory lane of total of 14 times this season on a variety of series and tracks. But what might be most concerning to his competition as that national touring series heads into a three-race weekend at Indiana’s Brownstown Speedway is that the 24-year-old driver has tended to win his races in bunches this summer and he appears to be in the midst of just such a streak.

Erb won two Lucas Oil features at I-80 Speedway in Greenwood, Nebraska back in July which included a triumph in the Al Belt Custom Homes I-80 Nationals that paid him $30,000. He then followed those wins up with three consecutive Ultimate Heart of America victories in Indiana giving him five wins in six starts.

Last week when the LOLMDS spent three consecutive nights at the historic Knoxville(IA) Raceway, Erb scored wins on Thursday and Friday then looked to be on his way to victory in the crown jewel Lucas Oil Knoxville Late Model Nationals finale on Saturday night until a mechanical issue doomed his chances. Although his team did get him back on track allowing for their driver to put in a tremendous effort, the No. 1 Rocket Chassis car ended the night with what might have seemed to be a disappointing sixth-place finish considering how fast the car was in the early portion of the race.

Still, Erb’s performance in Knoxville cannot be overlooked as the Dirt Late Model campaign heads into the fall season. And while he knows racing is a sport that can humble even the greatest of competitors, this driver is enjoying his current run of success.

“Three years ago I won my first national race here and it was the greatest thing that had ever happened to me, it felt like,” Erb recalled in his post-race interview with MavTV Plus following his Thursday night victory in Knoxville. “Two years ago we ran second on a Thursday night. To win tonight is awesome. Racing is so up and down. You think you’ve got it figured out but last week(World 100 week at Eldora) was one from hell for us. We had a big talk this week just trying to make everything go better. I’ve really got to thank my crew. This is one of my favorite race tracks, it’s so much fun. I’m happy to be standing here.”

To make that first preliminary win seem even sweeter and more impressive, Erb outran two of the biggest stars in all of American motorsports to earn the trophy. Jonathan Davenport finished in the runner-up spot while NASCAR star Kyle Larson rounded out the podium.

“Those guys are at the top of their game,” Erb declared. “What a lot of people don’t see from the outside in our day and age with the way these cars are, if the car is bad, you’re bad. That’s something we’ve been trying to work at to make our car better. We were really good at I-80, same tire rule and same dirt. Last week at Eldora didn’t go our way, but yeah, they’re two of the best racers around right now in each of their own divisions. It feels good to beat them. I’m super happy about it and I can say I’ve beat Kyle Larson. He may be the greatest of all time but I put one little nick in his wall. JD and Kyle do a great job but we gave it all we had.”

After his win on Friday night, Erb reflected the keys to his success.

“I’ve got a great car owner and a great crew,” he declared. “It’s fun. Racing’s really fun when your car’s good and you can kind of maneuver. I would never guess I could pass (Brandon)Sheppard and Tyler(Bruening) on the bottom like I did. It was a good race those first couple of laps. Once I got out front I could set my pace and I felt like the longer it went green the better I would get. It’s awesome. I’m thrilled, man, it’s crazy.” 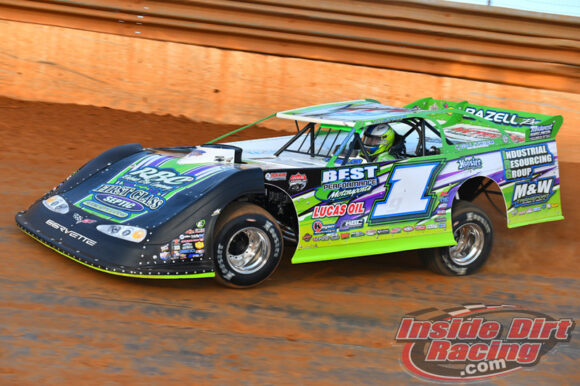 Erb appeared to be on the way to a prestigious and lucrative win in the Saturday night main event until his car slowed while leading on lap 40. Still, the Randall Edwards-led crew was able to repair the ailing machine during a planned fuel stop on the big half-mile. Ultimately, Erb drove to a somewhat disappointing but solid sixth-place finish.

“We stripped a gear in the rear end,” Erb explained. “Luckily, they’re good enough to be able to fix that. I don’t think in times past I would have been able to make it back out. I don’t know how much oil they got in it or what but they got me enough to be able to finish. Under that caution, I could tell it started locking up and they said it was smoking there at the end. When we fired back off I felt like I was dragging a boat. We were just fortunate to finish. It wasn’t our night but our car was really good again so we just have to come back next year and see what we can do.”

“It was one of my favorite places when I left to come here and it still is. It’s a super special place. Mikey has won here three times so he’s definitely got it going his way here but we were super fast everyday. I would have never imaged breaking while we were leading like that but it’s part of it.”

Erb and the rest of the Lucas Oil Late Model Dirt Series will be in action for three consecutive nights at the Brownstown Speedway in Indiana. Thursday night will serve as a makeup date for the previously rained out ‘Indiana Ice Breaker’ which will pay $15,000-to-win. Friday will feature a $10,000-to-win affair while the Jackson 100 will dole out $20,000 to its victor on Saturday evening.