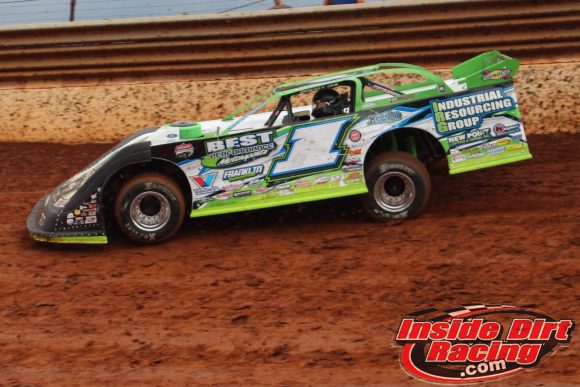 Erb started the day by setting fast time, then went on to earn the PFC Brakes Pole Award for the main event. Owens grabbed the early lead and held the point for the first 22 laps of the race. The next six laps saw a back-and-forth race for the lead between Owens and Erb. Erb took the lead for the first time on lap 23, but Owens fought back to regain the top spot. The two raced side-by-side with Erb regaining the lead on the 30th circuit.

Marlar took over the second spot on lap 39 after he and Owens had battled side-by-side for several circuits. A caution came out with five laps to go, which gave Marlar one more opportunity to sneak by Erb. On the restart Erb used the clean air in front of him to open up a slight lead, and went on to cross 3/4 of a second ahead of Marlar at the finish line for his sixth career LOLMDS victory.

“I really didn’t want to see that last caution because I had gotten into a rhythm,” said Erb. “I was kind of kicking myself when Jimmy got back by me for the lead. I knew when Mikey was behind me that things were going to be tough. I could hear Jimmy under me and then the same thing with Mikey. I just kind of let it go for broke in the last four laps. About a month ago I was in the same position and I wasn’t going to let what happened last time, happen again.”

With the win, the 22-year-old Texan not only keeps his points lead in the Rookie-of-the-Year chase
but also cut into point leader Jonathan Davenport’s championship point lead. Davenport finished 18th after pulling off the track due to heavy damage to his racecar.

“That was a pretty exciting race! Thank you to Jimmy and Mikey for racing me clean. We are really looking forward to racing again here tomorrow night. I really like this place. They do a great job preparing it. You can really move around all over it.”

For Marlar, the runner-up finish continued his strong run of podium finishes since the first of June in the LOLMDS. “This was an awesome race-track tonight, we could run anywhere on it. I ran the top, but I felt the car working better on the bottom. I have always enjoyed coming here, but I have never had much success here. Glad to come here tonight and get the monkey off of our back.”

McCreadie stayed in the top five and grabbed the third spot at the finish. “This was a good run. It’s Phillip’s [Crew Chief Phillip Snellen] birthday today. We are still working on a lot of things and we are getting closer. We started with a new shock company for the team and they had been out of racing for a long time, but we keep making strides and hopefully we can get a win soon.”