Home Features Tyler Bruening stepping up his game in 2021

Tyler Bruening stepping up his game in 2021 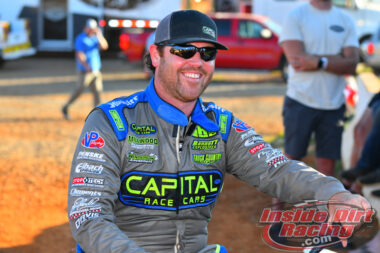 One Dirt Late Model driver who has been quietly asserting himself week after week as a contender on the World of Outlaws Morton Buildings Late Model Series is Decorah, Iowa native Tyler Bruening. Although he has yet to win a feature race on that tour, the 35-year-old pilot has worked his way into the third position in the series standings and has, of late, been making strong bids to achieve that breakthrough national touring series victory.

This past weekend illustrated just how strong this driver and his Skyline Motorsports team have become over the course of the 2021 season. Bruening placed 9th in the $40,000-to-win Rock Gault Memorial at the Cherokee Speedway in Gaffney, SC this past Thursday then went on to record a runner-up result at Georgia’s Lavonia Speedway on Friday and a fourth-place effort at the Volunteer Speedway in Bulls Gap, TN on Saturday evening.

In all, Bruening has earned eleven top-5 finishes along with 26 top-10s this year on the WoO Late Model Series alone, including eight top-10 efforts since the beginning of August.

From all appearances, the driver of the No. 16 Capital Race Car has certainly stepped up his game in 2021.

“For sure,” Bruening agreed in an interview with InsideDirtRacing.com. “It’s important to me to be consistent and to be competitive every night we go out. I feel like we’ve done that all year long. It’s really about checking those boxes for me, one step at a time and one race at a time. We’ve been working on that real hard all year. You’ve got to run up front, you’ve got to be consistent to to finally click off one of those wins and we’ve done that all year so we’re real close. We feel like we’re right there but it’s just getting over that final hump and getting that first one then let the rest of them fall into place.”

Bruening points out that he owes much of his success to Skyline teammate Shane Clanton and to Capital boss Marshall Green. Even though he and Clanton race on different tours, Bruening still can lean on the veteran driver for setup advice and track knowledge.

“He’s got a thick notebook and he’s only a phone call away,” Bruening explained. “At the beginning of the year we planned on running together then he got Covid and had to miss the first two or three World of Outlaw races and ended up not missing any of the Lucas Oil races. Just points wise, where he was at and where we were at it worked better for each of us to continue the route we were going. Sometimes it can be difficult and sometimes it can also be a good thing where you’re not so concentrated on one or the other and who’s doing what. You can kind of just concentrate on what you need for your car and make adjustments for what you need for your race car. It’s a big help for me between Shane and Marshall at Capital, it’s really helped me progress as a driver and for our team through these last couple of years leaning on them and having them for support.” 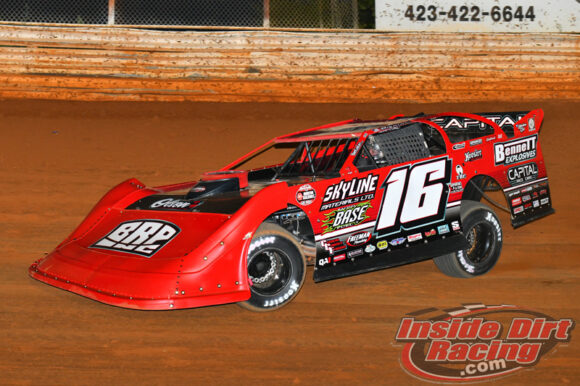 After racing on the Lucas Oil Late Model Dirt Series in 2020, this is Bruening’s first full campaign with the World of Outlaws. As a result, he and his team have found themselves on several tracks they had never visited before. Again, that’s where he has been able to rely on the 2015 WoO Late Models champion.

“There’s a bunch of tracks that we’ve never been to or never seen,” he described. “The last two years we’ve been on a (national)tour, last year with Lucas Oil and this year with the World of Outlaws, and it’s happened quite a few times where we roll into a place we’ve never been to and really have no notes or notebook to work off of. That’s where having a teammate comes into play for me. Shane has done this for many years and has been almost everywhere so we can rely on him and his notebook a little bit for setups in certain track conditions and racing conditions.”

No matter whether he has raced on a particular track or not, the World of Outlaws Morton Buildings Late Model Series ‘Rookie of the Year’ leader’s preparation varies very little. It’s a strategy that has served him well.

“Really for me, we go in with the same mindset that we do at a place we’ve been to before,” he declared. “We start with our base setup and listen to the car and work on it from there. I kind of like and enjoy going to new places that we’ve never been to before because expectations aren’t as high sometimes and there’s a little less pressure. You can just roll in and do your own thing and not have such high expectations for yourself. Usually we perform pretty well at those types of places.” 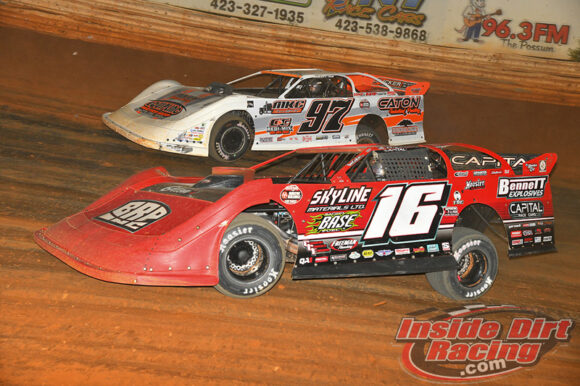 One thing that remains the same whether the No. 16 crew unloads at a familiar track or an unfamiliar one. The Capital Race Cars team will almost always be outnumbered by other chassis brands. But Bruening does not necessarily see that as a disadvantage.

“Again, it comes down to not only Shane’s notebook but Marshall’s notebook as well with what the local guys have been running and what’s been successful for them here and there,” Bruening offered. “Sometimes I think with there being so many Rockets and so many Longhorns it can kind of become somewhat of a distraction with ‘Why is he going better than me?’ or ‘What are they doing different than me?’ and you start worrying about what everybody else is doing and not about what your race car is doing and what it needs. At times it’s helpful because you can compare notes to see what they’re doing to make their car go better. It’s just worked well for us this year with how it’s gone with Marshall and Shane. Our team has just clicked. We’ve had good luck and all of those things have fallen into place and that’s why we’re running so well and why we are where we are in the points.”