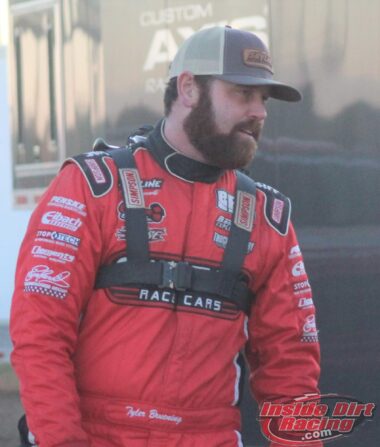 It’s easy to get caught up in all the discussion of Brandon Overton, Devin Moran, Kyle Larson or Dale McDowell as those drivers have dominated the headlines in the few Georgia-Florida SpeedWeeks races that have so far been contested in 2022. And more, all the talk of Longhorn Chassis and Rocket Chassis tends to dominate the storylines not taken up by the drivers. However, one driver and his car builder are trying to work their way into the conversation.

Tyler Bruening’s fifth-place result in Saturday night’s Lucas Oil Late Model Dirt Series feature at Golden Isles Speedway was his second finish in that position in as many nights. Out of the four starts he has made to date during SpeedWeeks, the Decorah, Iowa driver has scored those two fifths along with an 11th place result on Thursday night at the Brunswick, Georgia track added to a ninth-place effort at Volusia Speedway Park earlier this month in World of Outlaws Morton Buildings Late Model Series competition.

The 2021 WoO Late Models Rookie of the Year believes his team discovered something that made their car better over the past two nights at GIS.

“The competition here is real tough, so all-in-all we’ve had a good start to SpeedWeeks,” Bruening declared in an interview with InsideDirtRacing.com following Saturday’s feature. “There’s a lot of races to go but I think we might have stumbled on something last night. We wanted to get aggressive with the setup and we did that and it seemed to work out really well. The track was great all weekend and I can’t say enough about Kyle(Bronson) and his crew at the track here.”

In what proved to be a parade of Longhorn cars at Golden Isles, Bruening believes his Capital Race Car can keep pace.

The competition level is extremely high in modern-day Dirt Late Model racing. As a result, qualifying and heat races can be decided by thousandths of a second. In all but one feature so far in 2022, Bruening has been forced to start in mid-pack but has been able to rise through the field to earn a higher finish. That was evidenced by his top-5 result on Saturday after starting from the 15th position.

“When you look at the scoreboard and you look around at who you’re racing, it’s pretty surreal for me,” he declared. “It’s a lot of guys I grew up idolizing and I have a lot of respect for all of them. To be racing against them and be competitive with them means a lot to me and my team. And it feels good to mix up the bunch a little bit besides Rocket and Longhorn by putting our Capital up there.” 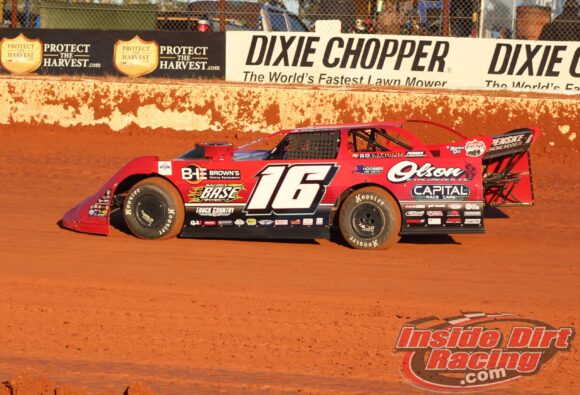 The driver who placed third in the final World of Outlaws Late Model series standings last season after piling up 12 top-5 and 27 top-10 finishes knows that success begins in the race shop. Bruening is quick to praise Marshall Green, Shane Clanton and everyone at Georgia-based Capital Race Cars for their efforts.

“Shane and Marshall and Capital and all the guys put their heads down and came up with a new piece for us,” Bruening pointed out. “I think we made ourselves better over the off-season which is what you’ve got to do if you want to compete and continue to get better. You’ve got to keep working on your stuff. We did that this off-season and I can’t say enough about Capital and the whole crew. They’ve put me in a good hot rod so it’s up to the driver to get the job done.”

Bruening and his Skyline Motorsports team plan to run all of the Georgia-Florida SpeedWeeks races which will put them back in action on Monday night at Bubba Raceway Park in Ocala, Florida.