Home Blogs Turn 2 Blog: What does the future hold for Dirt Late Model racing at Bristol?

Turn 2 Blog: What does the future hold for Dirt Late Model racing at Bristol?

Considering the high quality of drivers there, attendance at the XR Super Series-sanctioned Karl Kustoms Bristol Dirt Nationals was disappointing. What happened?

Richard: There will be a million excuses offered from ticket prices to gas prices to the weather, but the simple fact of the matter is that fans didn’t show up. Fans will ignore those same factors for the events that they have labeled as their favorites.

It would seem logical to think that with the likes of Overton, Sheppard, Davenport, Owens, Bloomquist, Madden, Marlar, McDowell, Ferguson and even Kyle Larson in the same event that attendance would be high but that was not the case. I understand that the Bristol Motor Speedway holds 160,000 people and to put 10,000 or even 15,000(which would be well over the capacity of most dirt tracks) causes the place to look empty, but still, the number of seats filled did not match the value of the event.

In 2021, there was a huge crowd on hand for the Bristol Dirt Nationals, enough so that it was obvious that the turnout was high, but such was not the case this time around. While there is that issue of the novelty of covering one of the world’s most famous race tracks with dirt was gone this time around, the fact that there would be four $50,000-to-win events within the space of two weekends should have been enough to override the loss of novelty.

Perhaps the event could have been promoted differently but I’m far from an expert on that so I won’t comment much further there. Still, these races were held in east Tennessee which is a hotbed of dirt racing.

Many fans complain that there isn’t enough attention paid to this form of racing. There was an opportunity to garner more attention to the sport these past two weekends but that apparently wasn’t meant to be.

Michael: I’m sure the promoters are scratching their heads and wondering why attendance was low. Judging from what I saw online, complaints ranged from not liking the format to the racing is too spread out on a legit half-mile track to lower than expected car counts. Given the quality of competition racing on both weekends, I’d rather have a stronger field of cars with lower numbers than a high car count event where there may only be four or five potential winners.

I did have a number of other media members, fans, and even drivers tell me they didn’t think the race was adequately promoted. Considering the amount of time since this event was announced, I’m not sure how big of a hinderance that was. But the novelty of Dirt Late Models racing at Bristol Motor Speedway has lot of some it’s luster. 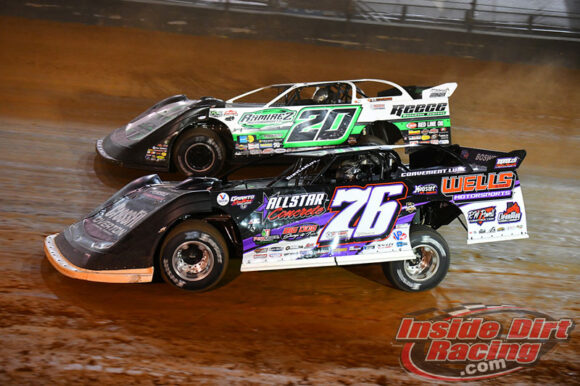 The dirt racing business model is definitely changing. Just a few years ago, financial success or failure in this sport was solely based on grandstand attendance. Now, streaming revenue from internet broadcasts is becoming a major revenue provider. Where is the balance between the energy of a big crowd and making money from subscriptions?

Richard: While, yes, the attendance for the Bristol Dirt Nationals was disappointing, the sport is in a transitional period as I see it in terms of what the norm is for generating revenue. Some events are largely meant to be made-for-television(or PPV) races and the streaming services may be willing to trade ticket sales for a particular race in exchange for longer term subscriptions. In doing so, they can assure that the money will keep rolling in all year instead of just for one date. We’re even starting to see individual tracks offer their own live streams to add to the bottom line.

Obviously, this is not something that will be beneficial to the tracks if their only way of making money is selling tickets and concessions. With that in mind, I can foresee a day in the not too distant future in which the streaming services begin to lease tracks for the purpose of serving as event promoters and staging races and generating content for their subscribers. In other words, selling tickets might be replaced by leasing agreements for the owners for some of the bigger events held at their facilities.

The raceXR company appears to be in the midst of working such a plan. Speedway Motorsports, Inc., owner of Bristol Motor Speedway, was not directly involved in the running of the Bristol Dirt Nationals. And such will likely be true for some of the other XR Super Series races held at places such as those on the property of Texas Motor Speedway and Las Vegas Motor Speedway.

Obviously, I do not know the exact terms of the agreement between racexR and SMI, but based on the promotion and structure of the event, the speedway itself appeared to play more of a supportive role. I believe that within a few years all of the streaming services will be operating under a model in which the revenue comes from unseen sources such as subscriptions and sponsorships. Further, tracks will be providers of the space to be leased for those televised events.

Michael: There have already been instances where a streaming service has leased a track to put on their event. Will we see more of that? Possibly.

I think promoters eventually relying on pit passes and streaming service subscriptions may be fool’s gold. If a track holds an event where it’s $30 a head to get in and they draw 3,000 fans, that’s $90,000 coming through the gate. That doesn’t count pit pass sells or concessions. I don’t think many, if any, tracks can make $90,000 from streaming alone. 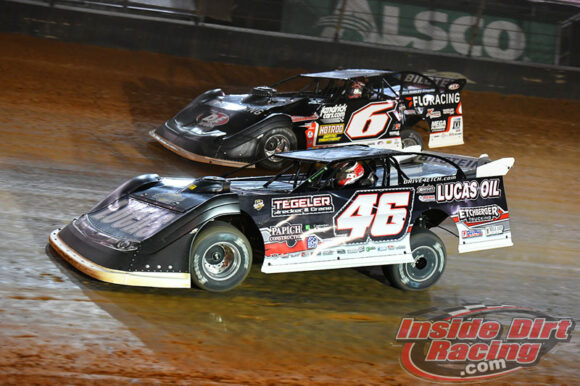 Earl Pearson Jr.(46) and Kyle Larson(6) racing on the high banks at Bristol

Bristol Motor Speedway is one of racing’s premier facilities. That said, it was not necessarily meant to be a dirt track. So, does dirt racing need to be on the high banks in Bristol?

Richard: Obviously, the ultimate answer to this question will not come from within the dirt racing industry. If NASCAR and Speedway Motorsports, Inc. decide that they no longer want to use the Bristol Motor Speedway as a dirt track, that will be the end of it, at least for another twenty years or so.

The real question then is, if NASCAR continues to hold dirt races here, should actual dirt racing events continue to take place?

My answer to that is yes. As I stated above, this is one of the world’s show places for racing and it is good for dirt racing to play a part there. However, I believe the structure of the way the events are laid out could be tweaked. To a man, the drivers were appreciative of the efforts made by raceXR and the biggest stars supported the races. However, four races in two weekends was a tough task for those who are not full-time racers. I believe one weekend with two big shows might have gained more support within the ranks of the regional racers.

The money was great and I was glad to see the drivers earning more. At the same time, this place is extremely fast for this type of racing. And I do understand the idea that the real purpose here is to get the track ready for the NASCAR Cup Series to hold its event. Still, the track could potentially be slowed down in some ways so as to ensure that when something goes wrong with one of the high powered Super Late Models it does not result in a destroyed car.

I will say this, though, the layout of the property does make it challenging for the teams. The haulers are parked a good bit away from the track. There is a parking lot right outside the entry gate that might make a better spot for the rigs these teams work and live out of.

In the end, a more condensed schedule and a change to the use of space might prove to be beneficial if this brand of racing is to continue at BMS.

Michael: I think the big question for Bristol holding dirt races will be solely on the success or failure of the NASCAR Cup race. In looking at the seats available for that race, they have sold well over half of their tickets. Last year was tough because of restrictions from the pandemic. We’ll see in two weeks what the real response is.

I’m curious to see how things go when the World Outlaws CASE Construction Late Model Series and the World of Outlaws NOS Energy Drink Sprint Car Series fare with both attendance and car counts. I believe both races are invitation only. If the Late Models can’t draw any more than XR did, it may be time to rethink the events held on dirt. I do agree if XR returns next year, they need to condense the format in some way. Running Super Late Models on 4 nights on 2 different weekends is a bit much.

Bristol is spending so much money to bring in and haul off the dirt, and to clean the entire facility, I’m sure the decision will come, some day, when the money spent doesn’t justify the effort. Then, NASCAR will have to find another venue or end their attempt at dirt racing. All of this will be discussed in great detail over the next few months.