Home Blogs Turn 2 Blog: What did the early Lucas Oil races tell us?

Turn 2 Blog: What did the early Lucas Oil races tell us?

Richard: The Lucas Oil Late Model Dirt Series’ portion of Georgia-Florida SpeedWeeks has come to an end and there is quite a bit to unpack. The drivers who won, the drivers who lost, the drivers who were not full participants, the crowds and track conditions were all topics for consideration.

I’m going to start with the drivers who won.

It should not have come as very much of a surprise that the likes of Brandon Overton, Brandon Sheppard and Devin Moran took multiple checkered flags as those drivers and their teams are not only good pretty much everywhere they race but each tends to come out of the box in a strong way early in the season. But even with the dominance of these younger aces, veteran stars Tim McCreadie, Jimmy Owens and Dennis Erb Jr. also tallied victories during the twelve features that were contested.

And apart from the winners, others had their moments in which they looked to be in contention. NASCAR champion Kyle Larson had two top-5 finishes in only three starts. Tyler Erb and Ricky Thornton Jr. had four top-5s each. And while Ashton Winger, Hudson O’Neal and Earl Pearson Jr. were a bit up-and-down, they each ended their time with the LOLMDS in decent shape due to the series allowing drivers to apply their best five finishes toward their points totals.

To me, the biggest surprise from the Lucas Oil portion of time spent in Georgia and Florida was that there were no real surprises. It seems like most seasons produce that one unexpected win by someone such as Mason Zeigler or Kyle Bronson(before he became a regular) but this year did not. Most everything went according to plan in terms of those who ran well.

What were your takeaways in terms of those who ran well? 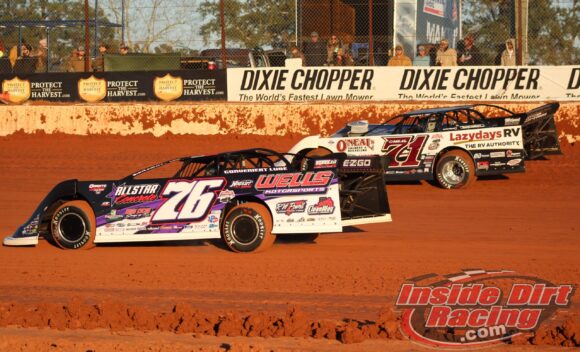 Michael: I have two takeaways on those that ran well.

The first is Brandon Sheppard. It should be no surprise that Sheppard would do so well. But after a season that saw him win less races in 2021 than in past years, Sheppard and the Rocket 1 team served notice they are back. Sheppard could have easily had at least two more wins if not for some on-track trouble.

The other is Devin Moran. While Moran won a lot of races last year, he certainly came out in dominating fashion. Just like Sheppard, Moran could have had 3-4 more wins than what he had. The most memorable was the close finish with McCreadie at Bubba Raceway Park. I believe he had only one finish outside the top 5 during those two weeks. He has come out looking to possibly having a similar season to what Brandon Overton had last year.

Richard: As far as drivers who were possibly disappointed with their Lucas Oil results in Georgia and Florida, two names popped up immediately in my mind.

We’re used to see Kyle Bronson come out of this stretch of races in his home state with a win on two in the bank. And while his performance wasn’t terrible, he did not ever seem to be a serious threat to win with a third and a fourth being his two best finishes to date. I was surprised to not see him even lead any laps at East Bay or any of the other tracks where is is typically very competitive.

Another driver who struggled that I thought might perform a bit better was Spencer Hughes. There were times last season when he showed flashes of greatness in the PCC Motorsports entry but it just didn’t happen over the fist couple of weeks of this season with a best finish of 10th being the high water mark. Of course, this is a very young driver and crew so there is a lot of potential upside here.

Were you surprised by anyone on the downside?

Michael: I was surprised by Hudson O’Neal’s performance. He did have one top 3 finish but it seemed like most nights they were behind in qualifying and had to spend the rest of the night playing catch up. The good thing for him is of those expected to run the series full time this season, he’s only 75 points behind McCreadie.

I agree with you on Bronson. It seemed like he had some of the same qualifying issues as O’Neal and had to really work to get close to the front. I think East Bay threw a lot of people for a loop this year.

Richard: Speaking of East Bay throwing everyone for a loop, several of the tracks in use for SpeedWeeks have been very inconsistent. Rough on some nights, smooth on other nights. Weather, as is often the case, seemed to play a major role in track conditions.

That said, though, that isn’t always a bad thing. While it’s never good for equipment to get used up, it does make for a better show when tracks have just enough “character” to cause drivers to have to search for the best groove.

Like I said, tearing up equipment or putting drivers in danger is never a good thing and there have been a couple of nights during SpeedWeeks so far in which drivers have been critical of track conditions, but overall, a little character is mostly a good thing, right?

Michael: Character for a dirt track is typically a good thing. There’s a fine line between character and rough. The first week of Volusia was rough. Even for the first night of the World of Outlaws Sprint Cars. So far, it looks like they finally have that worked out. Golden Isles had some character to it which made things interesting.

I found All-Tech to be interesting because the track was so slick and tricky, it really made the drivers be very precise in their lines entering and exiting the corners. It kind of reminded me of Florence Speedway back in the “Black Ice” days we used to see for the North/South 100.

Richard: Another thing I was paying attention to over the past couple of weeks was who would compete in all the races and who wouldn’t. Many of the top Dirt Late Model stars only have a few events listed on their website schedules where in previous years they would have a full season of races listed. In particular, several drivers only had a few SpeedWeeks shows listed instead of all the races held in January and February.

I wondered if some of those guys would show up then go ahead and run more races than they had listed. However, Jonathan Davenport, in particular, stuck with his initial plans and left the Sunshine State when he said he would. This may very well be a sign of things to come.

Whether it be because of a shortage of parts or the fact that there are more races paying $20,000 or more to win, it appears as if some who had previously been series regulars may not be this year. Is this a trend we are going to see more of as the season plays out?

Michael: I believe we will. Overton showed last year a driver can win a lot of money just by racing where he wanted to race and when. I also think we are seeing some fatigue among drivers and race teams by racing 70+ times a year. The Lucas Oil series made a concentrated effort a couple of years ago to get their schedule to the low 50’s. This year, they’re back up to 65 or so. I really think a lot of drivers would prefer to race closer to home more than running across the country.

The two major series are stepping up their purses, points funds, and other bonuses to entice the drivers to race with them. The XR series is putting on some major money races throughout the year and I believe a number of drivers will race in all or most of those. It’s going to be interesting to see when March rolls around who is racing where and who is not.