The Southern Nationals race at I-75 Raceway saw a very ugly situation take place after an incident between Ashton Winger and Mack McCarter. What are your thoughts on what could have been done differently?

Richard: When I first saw the incident, which was brought on when Winger and McCarter engaged in a slide job swapping contest that ultimately ended with Winger being forced off the track then rolling over multiple times, I initially thought McCarter had acted too aggressively and caused what could have been a serious situation. However, after review and hearing the thoughts of all involved, I now lean more toward the view that it was two drivers racing very hard for a win resulting in a bad accident.

Let me say here that I am glad Winger was not hurt in the accident. Further, I can certainly understand why he was so upset. Had I been in his position I would have seen the situation in the same way he did thinking I had been blatantly taken out and put in harm’s way.

But where things began to go terribly wrong was after the cars came to a stop under a red flag. A number of people who should not have been there spilled onto the track and a melee ensued between supporters of both drivers with officials struggling to regain control. Pushing, shoving, shouting and even some punching took place on the track itself.

Again, if I had been in Winger’s place I would have been upset as he was. I will add also that one of the people who spilled onto the track was Gary Winger, father of Ashton Winger. As a dad myself, I would have been angry thinking that another driver had pushed my son off the track. Still, it was his entry on to the track to confront McCarter that essentially opened the flood gate. From that point, there was little that could be done to keep the situation under control.

Ultimately, I don’t necessarily place all of the blame on one driver or the other for the crash. Emotions run high in circumstances such as that. But once people who came onto the track who were not supposed to be there, there had to be penalties and there were some. With the video available, it is possible to see who was there and some of those were hit with suspensions. Officials need to be sure that those penalties are severe enough to either discourage future episodes such as this or assure that those involved won’t even be at the track to engage in such behavior.

It was hard racing that had an end result that made the sport look bad.

*I will add here on a side note that tracks with no outside wall create more of a likelihood that this type of wreck can happen. I would like to see some sort of fix for tracks that have a steep drop off just off the racing surface. 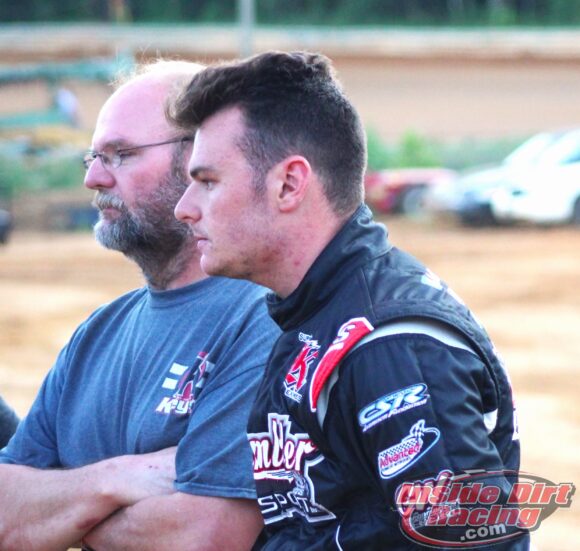 Michael: I think a big part of the incident was good, hard racing. McCarter was doing what he could to take away Winger’s line until the rollover accident happened. I don’t think McCarter was running Winger off the track to cause a rollover. He was just sliding up to keep Winger from zipping past him on the outside.

Was it a dirty move? I don’t think it was, but the incident was avoidable.

As far as the post-race activities, most tracks and series have a rule where a driver is disqualified if the driver is involved in an altercation or even a crew member. I’m surprised Winger was not disqualified. Maybe Ray Cook felt like it wasn’t warranted given the understanding of what happened. I do know the whole incident really got a lot of discussion for the drivers, the track, and the series.

I have noted numerous times on social media my dislike for tracks without outside walls. Had there been a wall there, Winger wouldn’t have left the track the way he did and both drivers might have raced each other differently. Going off a racetrack is an extremely dangerous situation. A smaller track like a Brownstown is okay without wall. But a high-speed track should have something in place.

The future of I-80 Speedway in Greenwood, Nebraska is very much in doubt as its longtime promoters the Kosiski family have announced they are done. It would be a shame for Dirt Late Model racing to lose one of its biggest events, wouldn’t it?

Richard: In what seems like a relatively short period of time the Silver Dollar Nationals has grown into one of the sport’s top events, so yes, it would be a shame to see it go. Bob Dillner of MavTV/FloRacing indicated that just because the Kosiski family is stepping away from the track, there is still the possibility that the venue could remain alive as a race track and could still host this race in the future. Hopefully that will be true but having some degree of knowledge of the racing industry, that might prove to be difficult.

I have never been there, but as we living in Tennessee know, property located close to an interstate can prove to be much more valuable when used as something other than a race track. On my recent trip to Pevely, Missouri I passed by at least three sites where tracks once sat but are no longer there.

I hope this track and this event remain a part of dirt racing, but until I hear definite confirmation, I am not overly confident. But all of that said, I am appreciative of the Kosiski family and what they did for racing.

Michael: We are seeing older track owners that are looking to get out of the sport not having any children looking to take over the operation. When that is the case, the owner will look for other potential owners. As you said, tracks located alongside interstates or major highways are more valuable for something other than a racetrack. We saw that in this area with Atomic Speedway.

I never give up hope on a track remaining open as a racing facility until I see the demolition start. We’ve heard the similar rumors about Volunteer Speedway in Bulls Gap. But it’s still here and still hosting racing. The right people have to be found.

Opposite of the situation at I-80, a recent race at Huset’s Speedway in Brandon, South Dakota saw drivers heap praise on the facility and express their desire to return. It’s nice to hear good things being said about a track rather than criticism, isn’t it?

Richard: Huset’s has quickly become a track that I have on my ‘bucket list’ of tracks to visit. While it is more known for Sprint Car racing, it was good to see it host the Lucas Oil Late Model Dirt Series this past week. By all appearances, it is a premier facility. Obviously, it’s location in South Dakota provides a challenge as the travel getting there is quite a haul. However, it would certainly be worth it for drivers and teams if they were to host a multiple-day event with a high paying race at the end as they do with the World of Outlaws NOS Energy Drink Sprint Car Series.

In their post-race interviews following the Lucas Oil race, each of the top-5 finishers lavished praise on the track and hoped they have an opportunity to return. And to answer the question, it is refreshing to hear a track receiving praise rather than having fans and competitors criticizing every little thing.

Michael: That was one of the more fun races I have seen this year. That is one racy place. The car counts were disappointing. But there are rumors that either Huset’s or I-70 could take the place of the Silver Dollar Nationals if that track is indeed demolished. I think Huset’s would draw more cars if they can host one of these bigger events. But it’s a big gamble for the promoter if the drivers still don’t come out.