Richard: This past weekend saw the 411 Motor Speedway stage its 5th annual Leftover event, and by all appearances, it was a big success. The pit area was completely packed for both Friday and Saturday with the average number of cars for each day just under 200 spread among the various classes. And while grandstand attendance was a little sparse on Friday afternoon, the number of fans that came on Saturday was solid.

This event, along with the Hangover which is held on or around New Year’s Day at this track, has proven to be a winner among competitors. Purse payouts are good for each class which helps to draw large numbers of cars to the facility. But perhaps more responsible for the turnout among drivers and teams is the timing. 411 has found one of those rare sweet spots on the racing calendar in which there is virtually no competition, particularly among the weekly racing divisions.

That was even more so the case this year being that there were fewer opportunities to race in 2020. Some may have wanted to put their cars on the track just because they had not had as many chances this year as in other seasons.

The Leftover and the Hangover have really sort of grown into happenings as much as a racing events, haven’t they?

Michael: I was thinking about this yesterday and it being a “happening” is probably a good way to put it. While the competitors take things seriously while on the track, I would consider everything else to be like a festival. I saw a lot of gatherings in the pits, lots of stories being told, and a general good time by most that I came across. It just seemed like a good way to close out the season here locally (even though there’s one more scheduled event).

As you said, Mitch McCarter and staff have found a sweet spot in the schedule with The Leftover. The weather cooperated nicely. Considering there weren’t huge purses on the line, the number of competitors was amazing. Everything just feel in to place.

I am starting to compare this event to what the Ice Bowl used to be 15-20 years ago. Huge car counts, decent crowds, and an occasional “big name” driver on hand to mix in with some really good regional drivers. 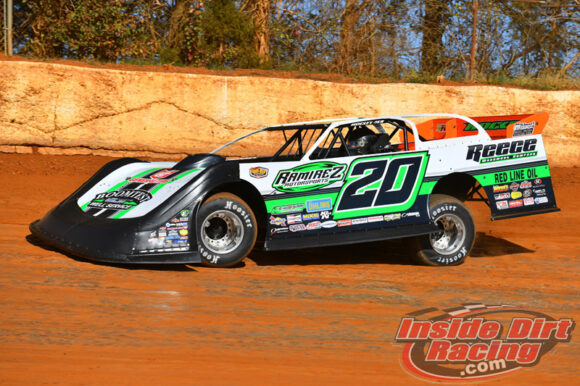 Jimmy Owens was a “big name” who competed in the Leftover

Richard: A key aspect in the success of The Leftover is the fact that 411 runs a very efficient program. With that number of cars on hand, the show is obviously going to take a while to play out. Still, I felt like things went pretty smoothly as there were no unnecessary delays to hold up the action on the track.

Furthermore, I know there are some who are going to be opposed to day racing no matter what, but the track was in excellent condition and provided the best possible racing surface, at least from my vantage point.

It’s not as if other tracks don’t do a good job at those things as some do and some do not. But 411 has long had a reputation for efficiency and a well prepped track. Those two aspects had to play a significant role in the number of cars that were on hand, right?

Michael: Reputations go along way in where drivers will go to race for events such as this one. While I’m no fan of day racing, 411 is the one place I will go to for a day race. They have found the secret formula to preparing a track for day racing, especially two days of it. The track doesn’t lock down like most do. 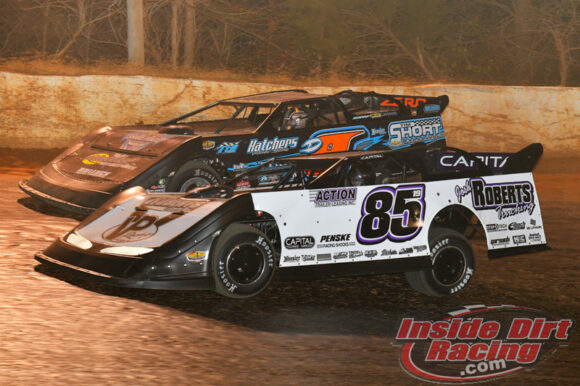 The Leftover attracted drivers such as Randy Weaver (85) and Dustin Linville (D8).

Richard: Kind of along this same line, tracks in the east Tennessee region, and no doubt all over the country, seem to be moving away from hosting weekly racing in favor of a special events only schedule. 411 Motor Speedway appears to be the latest to make that move. A schedule recently posted on Facebook by track owner Mitch McCarter showed only a few dates with each containing a special race of some sort.

We have also heard whispers that other tracks may be about to make similar revelations. If the Leftover serves as any indication, it’s easy to see why tracks might want to go in that direction. When several tracks are running weekly shows they divide up the number of cars. However, if those same tracks only run a special events schedule they can, in theory, pass a large number of cars in the weekly classes from one to the other.

Of course, some weekly racers would continue to go to the one track where they feel comfortable, even if only for a few times per year, or they would simply quit racing altogether. Still, the tracks may be hoping that enough will continue to race and will be willing to go from track to track on regular basis to make the special events strategy work. In an ideal world, there could be a scaled down version of the Leftover every week.

The model of running weekly shows at the same track has been on the verge of collapse or in need of a makeover for some time. I had a track owner tell me a couple of years ago that he lost money on every weekly show he ran and only came close to breaking even because the special events did well.

Have we reached a point in which the only way weekly racing can survive is to bounce those classes from track to track?

Michael: I don’t know if that is the case or not. Look at Mountain View Raceway in Spring City and the car counts they had all season. Some would say they are the current shiny object and the new will wear off at some point. They have done a great job of attracting drivers and cultivating some new ones. Will that last? Time will tell.

I had one promoter tell me something needs to be done about making racing more affordable for the non-late model divisions. He said if a driver is going to invest $20,000 into a modified street car or something similar, they might as well spend a bit more money and get into a crate late model. I tend to agree with that statement. We have too many late model divisions and not enough of something that doesn’t look like a late model.

The alliance between 411, Smoky Mountain, Tazewell, and Volunteer would be wise to have some of the same classes rotating among each other and have some type of combined points fund. At the same time, they need to explore options on how to create a class or two that doesn’t involve a huge investment to get going. This would get more people started in racing and create something that doesn’t look like a late model. As much as most of us love late model racing, many of us would like to see more cars that look like something that used to drive up and down the roads or something that currently does.