Richard: I believe an obvious starting point for this blog would be to discuss the legacy of C.J. Rayburn. Although my knowledge of the history of Dirt Late Model racing is very limited, I do know that Mr. Rayburn was not only a successful racer in his own right but was also one of the sport’s most legendary innovators when it came to chassis design and building. It was largely through his work that some of the great breakthroughs in terms of performance-based applications were made in this form of motorsports.

Rayburn passed away on January 1, 2022 after battling Covid pneumonia.

I think many would agree that C.J. Rayburn’s ingenuity took the first steps toward the place where we are today in terms of speed, drivability and overall performance in Dirt Late Model racing. He essentially ushered in the modern-day era of “Bought not Built” as racers moved away from constructing their own cars toward buying them from a manufacturer then tweaking them with their own personal preferences.

I don’t think it’s an exaggeration to suggest that not only did Rayburn change the on-track product on dirt but he transformed the entire industry. There are now numerous businesses whose sole mission is to supply the pieces and parts that go into the construction of the “Bought not Built” race cars that roll out of the well-known shops in the modern-day version of the sport.

The words “great” and “legend” are often used too frequently in all sports but those labels seem appropriate for this man.

So sad to hear this. CJ was one of my mentors I had Very much respect for him.
Someone corrected me in one of my other posts that Covid is a virus and not a disease. What ever you call it..it has taken a toll on our country and world.
Prayers to the Rayburn Family 🙏🏻 https://t.co/FEf2QnVqID

Rayburn was definitely a trend setter, wasn’t he?

Michael: The Rayburn race car was one of the first ones I had ever heard of other than some of our local car builders such as Warrior, Weeks, Stinger, and some of the others that were around back then. Around here, a number of people thought of the Rayburn car as a Midwestern car because of their location and where they had a lot of success, especially at Eldora. But that wasn’t true. Plenty of drivers in our area had success in his cars.

The man would help a lot of people even if they didn’t drive one of his cars. He was one of those car builders that would tell his drivers to be better instead of selling them something that wasn’t of any help.

His cars from the early 2000’s were some of the best I have seen until the recent versions of Longhorn and Rocket cars came along. Those cars won everywhere, including here in East Tennessee. 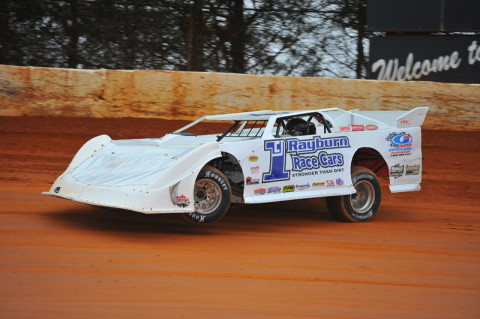 Richard: As we have said on here multiple times, the Dirt Late Model chassis business is a cyclical one, and unfortunately, the Rayburn cars eventually cycled out. But that won’t tarnish his legacy at all.

There are actually very few people who truly change the particular aspect of life they are most associated with. Henry Ford did that for the entire automotive industry. Alexander Graham Bell did that for communication. Don’t misunderstand, I am not saying that changing the world of dirt racing is on the same level as that of the assembly line or the telephone. Of course, Dirt Late Model racing is on a far smaller scale than either of those industries but C.J. Rayburn changed the way the dirt racing world carries out its business just like those men changed all of our lives and that’s the comparison I am making.

He was a game changer.

But now to take our conversation in a completely different direction. As I mentioned above, the dirt racing world is a small one. That said, however, there are times when this form of racing is very much disrespected, particularly by fans of other forms of motorsports.

This past weekend, Kyle Busch and his son, Brexton, competed in the Lucas Oil Tulsa Shootout for Micro type cars pf both the winged and non-winged variety. That event contested races in multiple classes over a four-day time period with over 1,700 competitors taking part on the dirt covered floor of the SageNet Center in Tulsa, Oklahoma.

After the racing was completed, Busch went on Twitter to mention that he and his son had enjoyed the experience. But of course, there are always those on social media who have to complain and seek out an argument, and sure enough, some went after the NASCAR star for racing on a “lower level”. Obviously, the implication was that the two-time Cup Series champion had an advantage over those other racers because he races at a “higher level”.

It was typical snobbery from those who simply want to talk without doing any investigation into the matter of which they are discussing.

That sort of thinking has always bothered me in that there is a line of thinking that says NASCAR drivers, Formula 1 drivers, or IndyCar drivers are more talented than any other racers simply because they race where they do. Note though, that the drivers themselves don’t think that way as Busch pointed out that he has great respect for the talents of those he raced against in Tulsa.

I enjoy all forms of racing and watch most all of them when given the opportunity. There are very talented drivers in NASCAR just as they are very talented drivers in pavement Late Model racing, Dirt Late Model racing, Sprint Cars, Midgets, and any other form of the sport you want to name. Just because a guy has not started the Daytona 500 or the Indianapolis 500 doesn’t mean he isn’t a great driver just like having taken the green flag in one of those events doesn’t mean that every one of those drivers is better than those in the “lower” forms of the sport.

The term “grassroots racing” has always been a pet peeve of mine. The teams that field cars for the likes of Brandon Overton, Jonathan Davenport, Brad Sweet or Donny Schatz are spending six-digits worth of money to compete at the level they are on. There is nothing “grassroots” about that.

Do you sense that same type of snobbery toward dirt racing from fans of other racing or am I just being too sensitive?

Please consider also reading “How long will the ‘Kyle Larson effect’ be felt in dirt racing?“

Michael: Yeah, I see some of that. But I see it both directions.

Some in the NASCAR media have built a narrative that NASCAR Cup racing is the ultimate form of racing. You can hear some say “these are the greatest drivers in the world.” If enough fans hear that over and over, they will eventually buy into that line of thinking. I can only laugh at some of the same media types that act like they’re doing any other form of racing a favor when they “step down” to that form of racing.

Thankfully, many of the drivers don’t see it that way. Kyle Busch took to Twitter to defend all drivers by basically saying just because somebody hasn’t heard of a top driver in another type of racing doesn’t make them a lesser driver or make it a lesser form of racing.

If it’s true then what r u saying about the best of the open wheel/dirt world? The WoO, top micro, dirt Late model guys/gals are all nobodies and not pro’s?! I will disagree all day long! Just because they aren’t “NASCAR” drivers doesn’t make them lesser. https://t.co/iWa2H4StCD

Richard: One example of that will come next week drivers from virtually every form of motorsports compete in the Lucas Oil Chili Bowl Nationals in Tulsa, Oklahoma.