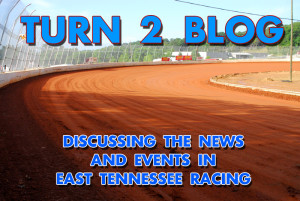 *Turn 2 Blog is the newest addition to InsideDirtRacing.com. In this regular feature, site operators Michael Moats and Richard Allen will take turns offering their thoughts on the east Tennessee dirt racing topics of the day.

While we’ve been keeping up with the comings and goings of the Cleveland Speedway, I have to say I was caught a bit off guard by the ownership change at Boyd’s Speedway with David Duplissey and Dale McDowell taking over there. That track moving to Saturday nights will bring about a change in the Chattanooga area as they have raced on Fridays there for quite some time.

Also, the former Murphy Speedway in Sweetwater, now known as I-75 Speedway, will add a whole new dynamic to the mix. It will be interesting to see how each of those tracks is supported by both racers and fans with both racing on Saturdays. And should Cleveland Speedway survive, which is a big question mark, there will really be a log jam down that way.

In terms of track related news, what has been the biggest story to you this off season?
Michael: After a quiet off-season last year regarding track ownership, this off-season has been quite the opposite. And when you think it has settled down, something else happens.
Right now, I would have to say that the situation around Cleveland is the biggest story of the off-season. The speedway has been around for 54 years and has hosted some memorable events in area racing. Whether or not it will remain open is 2014 is a huge cloud over the area’s racing scene. If it does close, this area will have lost Cleveland and Atomic within a 7-year period.
The biggest surprise has to be Duplissey and McDowell obtaining Boyd’s. I was not aware the Harveys were looking to sell. But it could be they received an off they could not refuse. I know the pair(Duplissey and McDowell) had been interested in obtaining Cleveland. Since they have turned their attention to Boyd’s and will run on Saturdays, they must know something about Cleveland the rest of us don’t know at this point. Boyd’s has always had their niche running on Fridays. It will be interesting to see how things work out with the change to Saturday nights.
Richard: The loss of Cleveland, should it happen, will definitely be a blow to racing in this area. And as you point out, it would combine with the loss of Atomic to take away a great deal of racing history from the region.
But more immediately, the possible loss of Cleveland could affect several touring series schedules. The Southern All Stars have used that track as somewhat of a base for the past several years, and they have four events scheduled for that facility in 2014. A shutdown in that location would cause the SAS to scramble in search of race tracks to fill those voids. And at this late date(it will likely be after Jan. 9 before we know what will happen to Cleveland), it could be difficult to find replacements.
I have also been told that the various Ray Cook promoted series'(Southern Nationals, Spring Nationals and Southern Nationals Bonus) are waiting to see what happens at Cleveland as well. There are a couple of holes on those schedules they would like to fill in that area because it fits with travel arrangements.
And further, support class racers are left in limbo because of the indecision. Those who planned to race in Cleveland may find themselves having to change their cars to fit rules for Boyd’s or I-75.
Michael: After seeing what happened after Atomic closed, I found that some of the racers in the support classes will move on to another track or will quit racing completely. The thing about those racers at Cleveland is that it looks like many of them already raced at Boyd’s on Fridays. We shall see how all of this plays out if Cleveland is to be closed.
I’m curious to see how things go at I-75 when it opens. The track will be all new, so that should attract quite a few people out of curiosity if nothing else. The other thing is how will things operate with Monty Morrow and Doug Sopha being two of the partners. Each has his own personality and have a little different approach when it comes to promoting a racetrack.
I’m also intrigued by Smoky Mountain hosting all three national touring series for dirt late models. I have no doubt all three races will draw big crowds. I think the NDRL weekend could be really huge, if the weather cooperates. There could be a ton of big name drivers racing that weekend at SMS.
Richard: I just finished writing all the major dirt races in my calendar, and I believe Smoky Mountain is the only track hosting NDRL, Lucas Oil and World of Outlaw races in 2014. There was a span of a couple of years in which this area actually had its number of national touring series races to diminish when Cleveland lost its Lucas event. Now, you’d be hard pressed to find any other region of the country with so many of those races with Tazewell and Volunteer also hosting big touring series races.
And oddly enough, this could also be one of the few areas of the country that could lose a track and have it replaced by a new one. Of course, we don’t want to write Cleveland’s obituary just yet as nothing is settled down there.
But the dynamic you mentioned at I-75 is an interesting one. As you suggest, the initial races at that facility will draw interest because of the newness of it all, so it will be very important for the track to take advantage of that and “hook” as many fans and racers as possible. I’m also interested to see if that track will host any special events as it has been Mr. Sopha’s strategy in recent years to promote mostly weekly shows when he ran 411 and Crossville where Mr. Morrow, as promoter in Cleveland, often brought in the Southern All Stars, Southern Nationals and Lucas Oil races.
One thing I’m sure of is that with all that’s going on, we picked a good time to start a new dirt racing website.