What are you looking forward to most in this week’s upcoming raceXR events at Bristol Motor Speedway?

Richard: With this being the second time around for races under the raceXR sanction, there have been a few changes. While there were potential bonuses for drivers who raced in all the events last year, there was not necessarily a series. In 2022, the newly formed XR Super Series will consist of the four events held over the next two weekends at Bristol Motor Speedway as well as races at The Dirt Track at Charlotte, Texas Motor Speedway, Las Vegas Motor Speedway and several other tracks around the country.

In all, the XR Super Series will be made up of 23 races. Although there won’t be an overall series champion, there are significant potential incentives for drivers who compete in all of the races as well as bonuses within the schedule for certain groupings of races.

Those points lead me to the biggest difference over last year. There is much more money available for drivers and teams. Over the next two weekends, there will be four features paying $50,000-to-win at Bristol alone. And more, the points champion in those four contests alone will earn a payout of $100,000.

Almost all of the XR Super Series features pay at least $25,000-to-win with a total of ten paying $50,000. Further, there are opportunities to “Double Down” throughout the season. What seemingly started out as a set of races on a NASCAR track that had been covered with dirt has grown into somewhat of a national tour and an internet streaming entity.

I think it would be hard to argue that the XR Super Series along with the races sanctioned by the FloRacing Night in America, which is another internet streaming force, have created bigger changes within the Dirt Late Model industry over the past couple of years than anything that has happened in a long time. 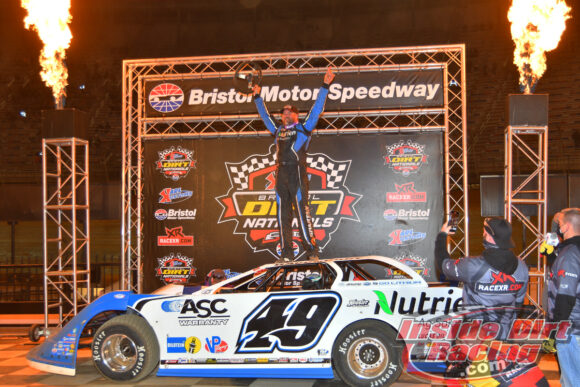 Michael: I totally agree with that. All one has to do is look at the drivers that are foregoing a series effort to race in these big-money races. Jonathan Davenport announced early on he was racing in most, if not all, of these races and other select, big-money events. He’s running a reduced schedule for more potential money. Just in the past week, we have seen Chris Madden drop off the World of Outlaws CASE Construction Late Model Series tour to run the four Bristol events and Kyle Bronson leave the Lucas Oil Late Model Dirt Series schedule to race where there is more money.

I think it would have been more interesting had the World of Outlaws not had races scheduled to see who really would have shown up for the money. But they have their own Bristol races in late April so they have to look out for their own series.

Is there as much anticipation leading into this year’s races at Bristol as there was last year?

Richard: Any time an inaugural event turns into a second annual event, there is bound to be some degree of drop off in terms of anticipation level. That said, the increased amount of money has certainly gotten the attention of the competitors if nothing else. The first weekend is likely to have a star-studded lineup as a result even though there will be an overlap with the previously mentioned World of Outlaws CASE Construction Late Model Series double-header at Cherokee Speedway in Gaffney, SC.

As anyone who follows racing knows, the likelihood of big stars at a particular race increases the likelihood of fans showing up. That said, I believe there will be big crowds at BMS. But the fact that there will be two weekends rather one will probably have an impact on attendance. Good racing and big stars on the first Friday and Saturday will serve as great promotion for the second.

In other words, the Karl Kustoms Bristol Dirt Nationals will garner plenty of attention. This much money will draw top drivers and top drivers will draw fans. That said, there may not be the same amount of buzz surrounding at least the first weekend but the attention will come.

Michael: I’m not really sure what the attendance is going to be like. I see the big names racing as a big draw. Then again, add to those Kyle Larson and Tyler Erb racing next weekend will add even more to the program. Some may wait and come next weekend, especially with gas prices the way they are.

Part of me wonders if fans will look at this as like they’ve done this last year, there may be no real urgency to go back again. When Bristol was covered in dirt in 2000 and 2001, the 2000 race saw 40,000 fans for the Dirt Late Model race while there was probably just over half of that in 2001. For me, I don’t see the same buzz around it on social media that I saw last year. But that doesn’t always translate into lack of ticket sales.

I don’t know how much longer putting dirt on Bristol will continue past this season. The way I look at it, people that may be interested in going should do so just in case they don’t do this again next year.

Has dirt racing reached a point, like NASCAR, where television/streaming is the primary driver of the sport?

Richard: There is no doubt that streaming is playing a major role in the sport. But where NASCAR has a system in place that allows its stakeholders to share in the revenue from television, dirt racing is dependent on the situation in terms of how that revenue is distributed. In some cases, the streaming services have taken the simultaneous roles of broadcaster and race promoter.

That said, streaming services are helping to create or enhance racing events, particularly the XR Super Series and the FloRacing Night in America.

But if this model is to continue, there will have to be a way for the tracks to somehow benefit from it. Yes, the tracks do get added exposure from the streams. Still, exposure does not pay bills so some sort of revenue sharing will have to be put in place or the streaming services and sanctioning bodies will have to take on even more of a role as promoters.

If fans are already paying for a streaming service, they are less likely to get in a car and drive more than two or three hours to watch an event when they can just watch from home. Obviously, that is going hurt the track’s bottom line.

Talking to track owners, I have been told that there are only a few events each year in which the facility actually makes money. The remainder of the time, breaking even is what they hope to do. If the bigger events are shown live, the track isn’t going to sell as many tickets.

Many tracks around the country are constantly fighting a financial battle and losing some to streaming services will not help. But to answer the question, I believe we are fast approaching a time in which broadcasters will play a major role in deciding many of the important aspects of race events.

Michael: The current situation with streaming dirt races is like the wild west. It seems like everybody is doing their own thing because they have their own agendas.

Myself, being involved in two racetracks on a limited capacity, I see the owner’s side of this. They are getting little to no return from a race being streamed on the various platforms. We are seeing tracks not take a date from certain series because they’re getting little to no financial help from their streaming choice.

More and more tracks are moving toward doing their own thing by streaming their races themselves so that way all the money goes to them. It’s smart. But even the most die hard race fans will stop somewhere because the cost of getting all of them really adds up. Where is the breaking point going to be? We may be about to find out.

Neither of the tracks I do some work for have FloRacing Night in America races. I do not know what kind of financial help each track gets from that deal. But from the looks of it, they must get some significant help considering the purses being offered for those races. It looks like it’s very feasible plan that benefits the tracks, drivers, and Flo.

Going back to your analogy of NASCAR, each track negotiated their own TV deal until the late 1990’s. Then the track owners and NASCAR decided it was best to have a comprehensive TV package similar to what the NFL and NBA had. Each track now gets a piece of the pie. In dirt racing, it’s being done in opposite. These series, both national and regional, decided they would broadcast their races with very little say-so from the tracks. This is where the conflict is and will continue to be until both sides and can find a way for it to work for all those involved.

Who will emerge to challenge Brandon Sheppard’s WoO supremacy?