Is Mike Marlar underrated among the top drivers in Dirt Late Model racing?

Richard: I definitely think Mike Marlar is underrated as a driver, especially outside of his home area around Winfield, Tennessee.

When you ask those who follower the sport of dirt racing closely to name the top Late Model racers you will hear names such as Davenport, Overton, Owens, Sheppard and McCreadie. But Marlar’s achievements rank among the top stars in the sport. After all, he is the only driver to have won the Lucas Oil Knoxville Dirt Late Model Nationals three times and that is a crown jewel race.

Marlar has not had as many opportunities to run a full series as the others listed above. But when he did get that chance in 2018, he captured the World of Outlaws CASE Construction Late Model Series title.

I think one thing that has caused people to not recognize Marlar in the same way they do those other drivers is the fact that he has not had the same stability in rides as some. He tended to bounce around during the early part of his career until hooking up with current car owner Ronnie Delk where he has been for several years now.

Marlar’s win on Saturday night in the $50,000 World of Outlaws-sanctioned Dairyland Showdown at the Mississippi Thunder Speedway in Fountain City, Wisconsin is just further proof that this 44-year-old driver can race with and beat the best in the business.

Michael: I think Marlar does fly under the radar a bit because of his changing rides and chassis brands for most of his career. I think some still consider him to be a bit of a journeyman driver for those reasons. Like you said, his accomplishments speak for themselves.

If not for some bad luck and misfortunes, Marlar could have been on his way to an Overton-like season. He had two hard crashes at Bristol that potentially robbed him of two wins and $100,000. The fact that he rebounded with a win in the Kyle Larson Challenge at Volunteer Speedway and now this weekend’s big win, Marlar is a driver that should never been overlooked at any track regardless of the competition. 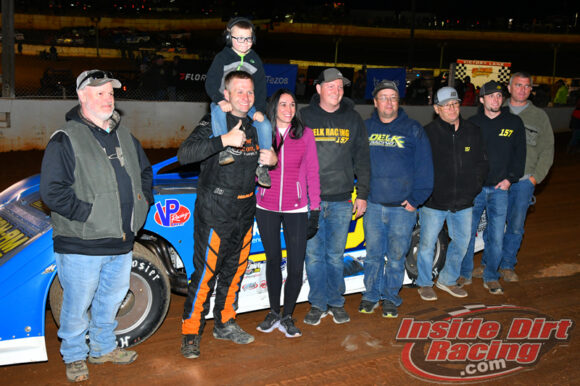 Mike Marlar has made plenty of trips to victory lane

Will the Colossal 100 races at the Dirt Track at Charlotte be a success?

Richard: I believe the answer to this question will be determined by the definition of the word success.

Considering that there will be four separate complete shows with the three of them paying $25,000-to-win and the finale doling out $50,000 to its victor, I’m pretty sure I know how the racers will feel about the upcoming week in Charlotte. As was the case during the Karl Kustoms Bristol Dirt Nationals, that is a lot of money to be had over a short period of time with only one travel stop to be made. As far as race teams are concerned, that’s an ideal situation.

Based on their @raceXR social media posts, a stellar field of drivers are expected to be on hand and that’s never bad for business.

But by the definition of success, the number of fans in the grandstands is the determining factor, I don’t know. As is always the case, factors such as weather, fuel prices, hotel prices and availability, and timing of the event will all play a role. The fact that there will be four days worth of racing may make it difficult in terms of ticket sales. With a venue not as large as Bristol Motor Speedway, the perception will be that the crowds are better than they were there even if the same number of tickets are sold.

However, these XR Super Series events have redefined what is meant by success. Ticket sales are always great for any race, but nowadays, the number of subscriptions sold to streaming viewers are not necessarily visible to fans but have a deep impact on finances. Keep in mind that when a ticket is sold, it impacts that day’s revenue but when a subscription is sold, it impacts an entire year’s revenue.

In the end, my definition of a successful racing weekend comes down to the quality of the show. A well run event with good competition is what matters most to me. Having that overshadows everything else. With great racing and a well run show, many of those other factors tend to take care of themselves.

Michael: You bring up some interesting points. But observers will always point to car counts, quality of racing, and fans in the stands.

I know the head of XR, Barry Braun, touted the Bristol Dirt Nationals as a success. For most people, it’s hard to believe that to be the case considering the attendance was not good, especially when comparing it to the attendance to the World of Outlaws races held there last weekend. But no one knows his true numbers as far as subscriptions sold, how much come from sponsors, etc.

The Colossal will be interesting to watch. Another promoter held events last summer at Charlotte and bombed out. XR has more clout and is paying bigger purses to draw the drivers. Will fans outside the Charlotte area flock to the track to catch it live? That’s the big question for me.

Richard: Oddly enough, I’m not so sure that the fact that there are more big races isn’t helping the car counts at the regional races. In previous years, a couple of the national touring drivers would show up at a Southern All Stars or Spring Nationals race if their tour was not in competition and we saw that this weekend with the likes of Brandon Overton and Tim McCreadie racing in the Spring Nationals event at East Alabama.

With it being known that big stars are coming, I’m not so sure that doesn’t sometimes dissuade a few from coming for fear they might not have a great chance of making the field or finishing high enough to make any money.

You and I attended the Southern All Stars race this weekend at I-75 Raceway in Sweetwater, Tennessee. I’ll admit that as I was heading to the track, I was thinking there might be a field of fewer than 20 Super Late Models in the pit area. Instead, there were 31 cars signed in for competition.

But as Jonathan Davenport told us in an interview earlier this year, it is very difficult for a team such as his to make money in a $5,000-to-win race. And with so many races paying more than $20,000 this year, there is no need for the national drivers to enter a race that pays less than $10,000 that isn’t part of a national tour.

All that said, promoters will mostly likely miss having star drivers such as Brandon Overton, Jimmy Owens or Scott Bloomquist showing up at one of their races even if just to test a new setup or practice for a higher paying event later in the season.

Ultimately, the line between national and regional drivers seems to be more defined than it was even last year. We’re in the midst of changing times in this sport.

Michael: There are several ways to look at this. As you said, the bigger drivers are no longer competing in these races on off weekends. That is helping the regional and local racer to have a better chance to pick up the win.

I know in publicizing the SAS race at Smoky Mountain Speedway a couple of weeks ago, it was hard to promote who was coming to race. But one thing it did do was to allow fans to see a driver get a win that normally doesn’t get a win. For someone like me, I think it made things more unpredictable and fun knowing a number of drivers had a legit shot at a win. For the average fan, is that enough for them to come see the race?

With the rising costs of fuel, tires, engines, etc., most drivers are probably breaking even by winning a $5,000 to win race. That also has a lot to do with who is and isn’t competing in these races. I think a $5,000 to win race is now a lot like the $3,000 to win races from 8-10 years ago. I feel the regional series, and the tracks that hold their races, need to find ways to get those purses up next year.