Turn 2 Blog: How much will coronavirus impact dirt racing?

Richard: Well, there is no way we could have predicted that we would be in this situation even as recently as just a few days ago. But here we are. Due to the world-wide outbreak of COVID-19, most racing action has been halted. Everything from the start of the Formula 1 season to NASCAR and IndyCar has been postponed or cancelled. And it has impacted many dirt races as well, although the Ultimate Super Late Model Series did get their opener at North Georgia Speedway in this past Friday.

This is going to create scheduling nightmares for the tracks, series, competitors, and fans. And perhaps the most troubling thing of all in regard to racing is that there is no way of knowing just how long this might go on. Obviously, not contributing to an increase in the coronavirus outbreak is most important. That said, however, the economic impact on racing will undoubtedly be far reaching.

In terms of dirt racing, we are already talking about a sport that struggles financially in most corners. We see tracks close on almost a monthly basis as it is. Some series, particularly on the regional level, have trouble attracting cars to their events because many teams have faded away or have to be very selective in picking their outings. And that was before this health crisis occurred.

I have considered the economics of dirt racing often, and in my mind, there are many aspects of it that don’t add up. In most respects, this sport exists largely because of the dedication and passion of its promoters and participants. But there is only so far that can go.

Any sort of prolonged shutdown, whether voluntary or mandated by some government entity, is going to be difficult for many in dirt racing to overcome, isn’t it? 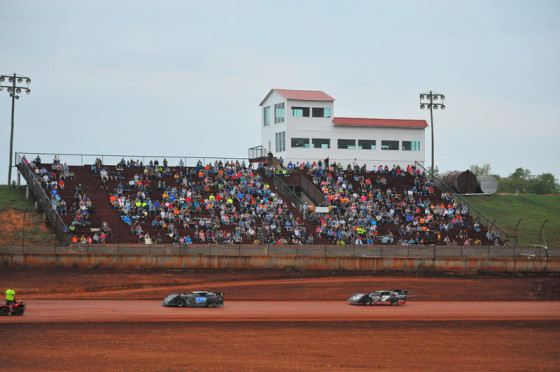 Race tracks depend on filled grandstands for their revenue

Michael: If the shutdown lasts well into April, it’s going to be devastating to some in the racing business. I think the ones that will be the hardest hit will be parts suppliers, chassis builders, engine builders, and so forth. If people aren’t racing, there is no need to fix or replace parts.

I think the fact this is happening so early in the season makes it less of a hardship on those whose livelihood relies on racing. Most race tracks across the county have not started their weekly programs. This past weekend saw no scheduled races for most touring series. And as you mentioned, some of those that did have something scheduled were able to race.

If some of these shutdowns only last a few weeks, I think most people will come out fine that are in the racing business. There’s enough time to reschedule plenty of events. And I anticipate the crowds to be really good once some sort of normalcy returns.

Richard: Excellent point about the suppliers. Those are likely to be the people hit the hardest as a result of this situation. Part of the problem with that is it could set off a chain reaction within the industry that could affect employees of those companies as well as other companies that do business with each other.

The hope has to be for all involved that this proves to be short-lived.

We have all grown accustomed to missing out on races in the spring due to weather related issues. And that is why there are so many openings on national and regional touring schedules during this time of the year. Now I suppose we have just added a new element into the mix with an outbreak of illness as far as disruption to the racing schedule is concerned.

The problem for some tracks is that some of these early events, particularly if they involve one of the two national tours, are vital to the track’s bottom line. As was pointed out by Smoky Mountain Speedway general manager Casey Moses in a piece we ran here recently, those races can make or break a track’s season.

The real issues, as I see it, is if these coronavirus postponements and cancellations extend over a long period of time. As we have seen in these past few weeks, the masses are easily swayed into doing things that may not be logical such as emptying stores of their entire toilet paper supply. And politicians are swayed by the masses because that’s where their votes come from.

While missed races may be somewhat of the norm for this time of year because of rain, this deal has us truly sailing in uncharted waters, doesn’t it?

Michael: I have never seen anything like this. What else is to come and when things will return to normal is a big unknown.

The longer this lasts, the harder it will be on those forms of entertainment, such as short track racing, that operate with smaller budgets and smaller margins. The NBA, NASCAR, and others have the ability to overcome short term loses. Your local race track or independent minor league baseball team might not. I’m sure many of these owners, especially those that don’t fully own their facility, are a bit concerned.

Richard: Yes, the when part of it is the key. Like you, I believe that the crowds will be plentiful when racing and other activities resume. Heck, after just a couple of days of sitting idle in my house I am already going a bit stir crazy.

But on the other hand, I guess there is the possibility that folks might learn over the next few weeks that they can make it just fine without having to leave the house.

On another note, one thing this situation is confirming, although we already knew this, is that iRacing and other forms of online gaming in the racing realm are wildly popular. Over the weekend I have seen numerous races being talked about in Dirt Late Model, NASCAR, Formula 1 and other formats. Even some of the top “real” drivers have taken part.

I have often wondered if gaming actually stirs more interest in actual on-track racing or if virtual racing simply exists in a universe of its own. The next couple of weeks might very answer that question.

Does gaming increase interest in actual racing or is it a totally separate deal?

Michael: I’m not really sure. Back in the days of the Dirt Track Racing game, NASCAR Racing 2003, and other games from that time were games I was interested in because of racing. I’m not sure how many people today are into it for the same reason.

I, too, am a bit surprised how popular it is today considering the coverage online events can get. It’s not my thing, but I’m not going to bash anybody that’s into it. Heck, I might have to dust off my steering wheel and pedals and play some of my older games if the lack of racing events lasts more than a couple of weeks.