Turn 2 Blog: First Bristol Weekend in the Books & Takeaways from WoO at Cherokee

What were your thoughts regarding the competition on the first weekend of the Karl Kustoms Bristol Dirt Nationals?

Richard: First of all, the field may not have been as big in numbers as high-paying races such as those held at Eldora Speedway and some of the other crown jewel events but the quality of competitors was first rate. Whenever you can put that many national touring champions and crown jewel winners together in the same place that’s impressive. There was no shortage of star power there on the first Friday and Saturday of this two-weekend happening.

Secondly, hearing the excitement of the drivers who came into the Media Center each of the two nights was uplifting. Not only the winners but the podium finishers were thrilled to be there and it’s always good to see drivers happy following a race.

Finally, it was refreshing to see Chris Madden and Chris Ferguson score $50,000 victories. Of course, Brandon Overton, who had such an amazing year in big money races last season, and Jonathan Davenport, who always seems to rise to the occasion in big events, were probably considered the favorites going into the weekend but Madden and Ferguson drove great races.

Madden finished 2021 in strong fashion and has picked up where he left of last season with his win on Friday. Ferguson is always fast but seems to have bad luck bite him at the wrong times but he was able to seal the deal on Saturday. There was a lot to like about the field of top drivers assembled there and the results.

Michael: I have said many years that I will take quality over quantity. No offense to some of those that competed in last year’s event, but there were only a handful of legitimate contenders in last year’s field. This year, most of the field were legitimate contenders. It definitely showed when the Friday front runners weren’t at the front on Saturday and vice versa.

Had the World of Outlaws not had races at Cherokee Speedway this past weekend, it would have been interesting to see who from that series would have made the commitment to compete at Bristol on Friday. There was not shortage of cars there, so it was a win-win for both as far as car counts went. 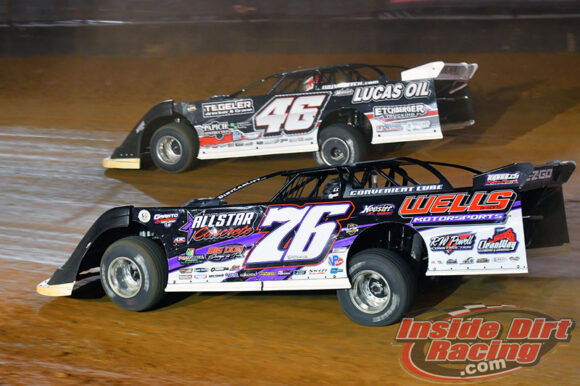 While the money teams are racing for in Bristol is great, the speed and other factors can take a toll. It’s a tough balancing act for them to decide whether or not to race there, isn’t it?

Richard: As we discussed in a previous Turn 2, anytime an event at such a unique place as the dirt covered Bristol Motor Speedway goes from an inaugural to a second annual there is going to be some drop off in terms of those who are excited about it. That certainly seemed to be the case with the lower classes of cars as there were fewer in those divisions than there had been in 2021’s Bristol Dirt Nationals.

Further, I had one car owner of a support class team tell me that it wasn’t worth risking a full season of racing just for a “cool” experience at a NASCAR track. As several drivers pointed out and as was demonstrated on both Friday and Saturday, when something goes wrong, it goes wrong in a big way.

All that said, however, the money the XR Super Series has put up for the Super Late Model class in particular is outstanding. While there is a risk factor, and that is true every time a race car goes onto any race track, the payoff can be highly rewarding.

I am anxious to see how many come back next week, especially with that $100,000 bonus for the top points getter from all four races still in play.

Michael: I do know of several car owners, in all the Late Model classes, that chose not to go to Bristol because of the possibility of trashing a car. I know that can happen anywhere on any track. But the corner speeds are so great at Bristol, there aren’t many small accidents there.

I do wonder how many drivers will choose not to return this weekend, especially for those not fairing well both nights and those that suffered some heavy damage in crashes over the weekend.

At the same time, I wonder if a few more will see an opportunity for a good payday if several contenders drop out. It will be interesting to watch this week. 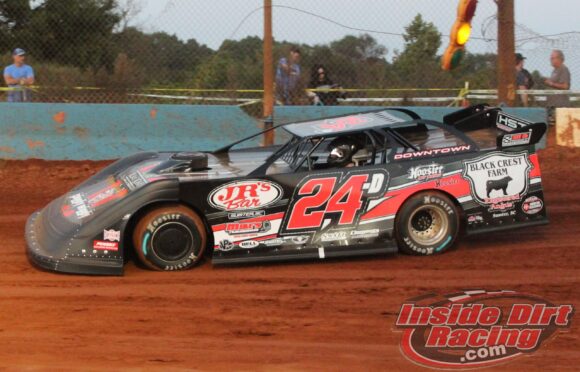 The World of Outlaws CASE Construction Late Model Series held a big weekend at Cherokee Speedway in Gaffney, SC. What were your takeaways from that two-day event?

Richard: The most interesting thing about the WoO Late Models at Cherokee had to be the winners. South Carolina driver Michael Brown scored his first ever series win in the $10,000 show on Friday while ‘Rookie of the Year’ contender Max Blair, who is always tough in his home area around Pennsylvania, picked up $20,000 in the Saturday finale. It was good to see a fresh face(Brown) in victory lane in a national touring series race and it was noteworthy for an “outsider”(Blair) to get a win on the red clay of the Carolinas.

But what might have been more interesting was who didn’t win. Many observers have already conceded the WoO championship to Brandon Sheppard and the Rocket Chassis house car team and he did appear to be on his way to a feature win on Saturday until a spin put him at the tail of the field. But even with his success in non WoO races this season, he has not looked like his usual self in the series events.

Dennis Erb Jr., who has gotten off to a very nice start in 2022, is currently leading the World of Outlaws Case Construction Late Model Series standings. It will be very interesting to see if he can maintain his early pace this weekend at Farmer City in the home state of both Sheppard and Erb(Illinois) and ultimately challenge Sheppard for the title as the season wears on.

Michael: As you pointed out, Sheppard has seemed unbeatable in non-WoO events while seeming a bit off in the WoO races. It’s very odd. He was going to win Saturday, but tangled with a lapped car and spun out. It’s still not something we see from him that often.

One takeaway I have from the weekend was good car counts for both nights considering some of the drivers that typically race at Cherokee were at Bristol. Between that and Sheppard’s issue on Saturday, it opened the door for some fresh-faced winners both nights.