Richard: This past weekend I attended the Short Track U.S. Nationals at Bristol Motor Speedway. It’s a great event that brings pavement drivers from the Super Late Model, Pro Late Model, Street Stock and Mini-Stock divisions to the big NASCAR track to compete in what amounts to their “Daytona 500”. The car counts were outstanding(80+ in the Mini-Stock class & 40+ in the Street Stock class) and the competition level was outstanding.

But the thing that caught my attention as it applies to dirt racing is the fact that there is an almost unprecedented level of cooperation between three different sanctioning bodies. The event is co-sanctioned by the ARCA/CRA Super Series, the CARS Super Late Model Tour, and the Southern Super Series. It’s that cooperation that helps lead to the solid car counts.

As a matter of fact, this is the second of these events I have attended this season. The ARCA Menards Series at the Fairgrounds Speedway in Nashville was paired with a Super Late Model race also co-sanctioned by the same three organizations.

While we have on occasion seen this sort of thing in Dirt Late Model competition, most recently in a few races in which the Ultimate Southeast Series and the Carolina Clash Series worked together, it’s not something that is commonplace. And of course, the Iron-Man Late Model Series recently paired with the Spring Nationals to co-sanction events.

But with all the regional tours running in the southeast, this seems like something that could be organized with points being awarded for each series and an increased purse up for grabs. Dirt tracks and series haven’t always had the greatest of reputations for cooperation but with the rate of closure currently occurring in this industry, it’s probably time to start thinking outside the box, isn’t it?

Michael: As car counts seem to be a bit down this year, I think the time for that is now. The fans would love to see it and the drivers would probably welcome it. Most of these series only have a couple of drivers running for points. It’s up to other drivers from the area to show up in hopes of having a full field of cars.

The negative with regional Dirt Late Model racing series is everyone has their own agenda. That’s why there are so many of them, especially here in the Southeast. The rules can be a tad different and the tire rules are different. Some of these have their own tire deal which is how they got started in the first place. A person may work for one of these series, and either have their own ideas they feel are better or get mad at someone else, and they go start their own series. Most people in the sport feel like they have better ideas than the next.

Heck, I have often times thought to myself of what kind of rules or format I’d put in place to make my own regional series that would be better than the others. Follow the chain of some of those that run or work for these series and you will see some who have worked for at least one of the others at some point. That’s why there is little cooperation.

Richard: You are exactly right when it comes to the personal rivalries as well as sponsor commitments getting in the way of cooperation on the dirt side of things. And for that matter, I’m not going to pretend to be some sort of expert on what all goes on with the pavement side of things. However, my guess is that at least to some degree the pavement folks began to cooperate with each other out of necessity as car counts and fan counts began to drop off.

The hope is that dirt racing never reaches that level of desperation. But again, I’m not saying that is what happened with pavement short track racing.

Running a race track or a racing series is hardly any different than any other business in that if you offer what the people want at a price they deem as reasonable, the business will succeed. Fail to follow that plan and the business will fail.

While we are not necessarily at the point of panic in the dirt racing industry, recent track closures are attention getting, aren’t they?

Michael: I think those closures are getting plenty of attention from current track owners. All it takes is one critical mistake from a successful track owner before it comes off the rails. I will always remember how great things were going at Atomic Speedway in the early 2000’s. Then after one mistake, the thing started going downhill and the owner could never recover.

It is so hard to get things back once the momentum has been lost. With so many entertainment options available to people nowadays, it’s even harder today to recover when things hit rock bottom.

Richard: And for a complete change of pace and to steer the conversation in a more positive direction, this is one of the biggest weeks of the season for Dirt Late Model racing as teams head to Rossburg, Ohio and the Dirt Late Model Dream at the Eldora Speedway. And to make things even more interesting, Tony Stewart, Roger Slack, and the team at dirt racing’s most famous facility have added to the purse making this event worth $125,000 to the winner.

With the Show-me 100 having been cancelled due to a severe storm that roared through the Wheatland, Missouri area, the Dream will now serve as the opening of the crown jewel portion of the racing season. Big money can be made and reputations can be forged from this event.

There are numerous storylines to watch for this weekend. Will Scott Bloomquist return to competition or will Shannon Babb pilot the famed No. 0 car? And, if Bloomquist does indeed return how competitive will he be considering that this will be his first start since suffering very serious leg injuries in a motorcycle crash? Also, will either Jonathan Davenport or Brandon Sheppard emerge from this race as the clear leader of the Dirt Late Model world for 2019? Can Bobby Pierce steer his family team’s ride to victory lane? Can Tim McCreadie capitalize on recent momentum and add another Eldora trophy to the globe earned from last year’s World 100? Or, can Josh Richards earn his first big win at Eldora driving for Clint Bowyer Racing?

Which of these or other storylines will be watching for from the Dream?

Michael: I will be watching Davenport, Sheppard, and Richards. Davenport is on such a roll, I’m curious to see how that translates into his performance at Eldora. And for all the races and championships both Sheppard and Richards have won, neither have won The Dream or the World 100.

I will also be watching the circus around all the rumors about the return of Bloomquist. The wishful thinkers are hoping he’ll make a story book comeback and drive the 0 at Eldora. Nothing gets the internet buzzing like a bunch of Bloomquist rumors, especially now that he’s been out of racing for several months. I just enjoy the pure entertainment of it.

Richard is picking Tim McCreadie to win the Dream

Richard: Of all those stories I mentioned I think I will be paying attention to Davenport vs. Sheppard most of all. There’s so much intrigue there in terms of Longhorn vs. Rocket, Lucas Oil vs. WoO Late Models, and more.

And now for our fearless predictions. As far as the big winner on Saturday goes, I am actually going to go just slightly off the beaten path and pick Tim McCreadie to take the monster payday. He won the World 100 last fall and he has shown marked improvement over his past few starts.

Michael: I was thinking about McCreadie myself. But I will go in another direction and pick Dale McDowell. I think a Sweet-Bloomquist car will win and McDowell seems to be running the best of that group. 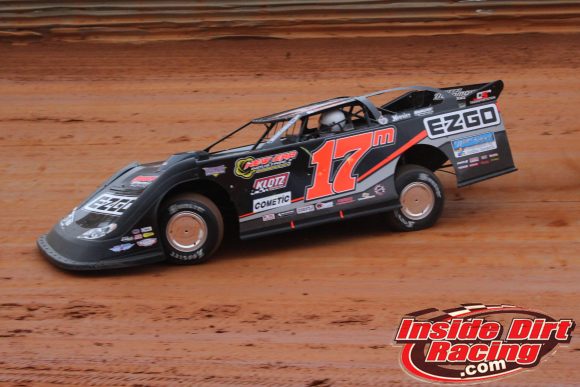 Michael’s pick to win the Dream is Dale McDowell