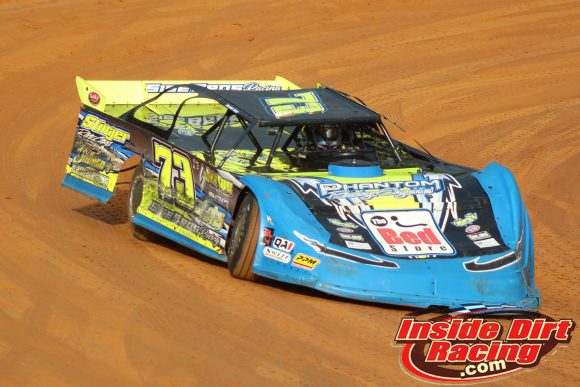 Trevor Sise picked up the win at Boyd’s

As part of the Boyd’s Dirt Showdown on Saturday night the 604 Crate Late Model class took to the track at Boyd’s Speedway. At the end of the evening it was Trevor Sise who left the Ringgold, GA facility with the $1,000 first place prize.

The top-4 from each of two qualifying groups would be locked into the feature event.

Trevor Sise led the way in Group A time-trials with a lap of 14.573 seconds around the third-mile clay oval with Ethan Hunter, Wil Herrington and Lucas Ruark following.

Christian Hanger was fastest in Group B qualifying with a lap of 14.617 seconds. That effort beat out Sam Seawright, Josh Henry and Jake Rainey.

Zach Sise won the first heat race for this class by beating out Ahnna Parkhurst and Devin Stuart while Logan Palmer topped Tim Clark and Brandon Carpenter in the second preliminary.

Rusty Ballenger took the win in the third heat over Addison Cardwell and Dustin Harris just before Bryan Pritchard won the fourth and final heat ahead of Mike Combs and Ruben Mayfield.

At the start of the 25-lap feature it was Trevor Sise who bolted to the early lead with Hanger, Hunter and Seawright trailing. Just before the completion of the first circuit Hunter bobbled which allowed several cars to pass by.

A lap 5 caution slowed the action for a spin near the tail of the field. Seawright slipped around Hanger for second on the ensuing restart then closed in on Sise for the lead before another yellow flag waved on lap 6.

On the next restart Hanger returned to the second spot while Zach Sise was able to move around Herrington for fourth. At the same time, Trevor Sise began to pull away from his pursuers.

A caution for a big crash on the backstretch took place on lap 8. Seawright again got around Hanger for second on the restart then Zach Sise also passed by Hanger to take the third position in the running order.

Over the closing laps Seawright closed right to the tail of the lead car as they worked through slower traffic. But in the end it was Trevor Sise who would cruise to the feature win.