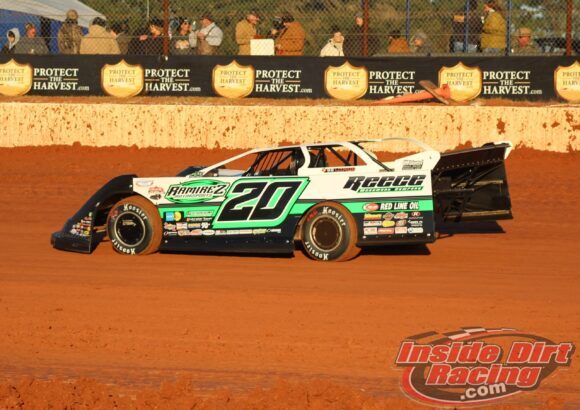 Jimmy Owens will be in action at SMS

According to schedules posted on websites as well as information discerned from social media posts, a stellar field appears to be poised to make a run at the $12,000 first prize being offered by the Roger Sellers-owned track.

Former Lucas Oil Late Model Dirt Series champions Jonathan Davenport and Jimmy Owens are likely to be on hand when the green flag waves to start the main event at the historic venue. Also, former World of Outlaws CASE Construction Late Model Series titlist Mike Marlar is expected. And at least one of the three drivers who holds the unique distinction of having claimed the championship trophy from both of those national tours in the person of Tim McCreadie is scheduled to enter the fray this weekend.

Along with those already mentioned, crown jewel winners such as 2021 Show-me 100 champ Hudson O’Neal, 2018 North-South 100 victor Ricky Weiss and the big winner at Eldora Speedway in 2021 are believed to be on their way to the 4/10 mile clay oval.

And there’s more. Hall of Fame members Dale McDowell and Skip Arp will suit up to show they still have what it takes to compete with the younger crowd. Also note that star drivers such as Chris Ferguson, Tyler Erb and Zack Mitchell will be joined by the likes of up-and-coming hopefuls such as Sam Seawright, Cameron Weaver, Christian Hanger, Wil Herrington and Eli Beets.

Not only will these drivers and teams be competing for a nice payday on Saturday night but they will be adding to their notebooks for when they come back to SMS later in the season for events such as the Lucas Oil Late Model Dirt Series double-header in June that will feature a $50,000-to-win purse in its Saturday night event and a World of Outlaws CASE Construction Late Model Series race in September with a $10,000-to-win payout.

Along with the Ultimate/Iron-Man co-sanctioned Super Late Model affair this Saturday two other classes will be action. The Kajun Mini-Stock Association and 604 Late Model divisions will also contest feature races. There should be plenty of intense racing action on tap.