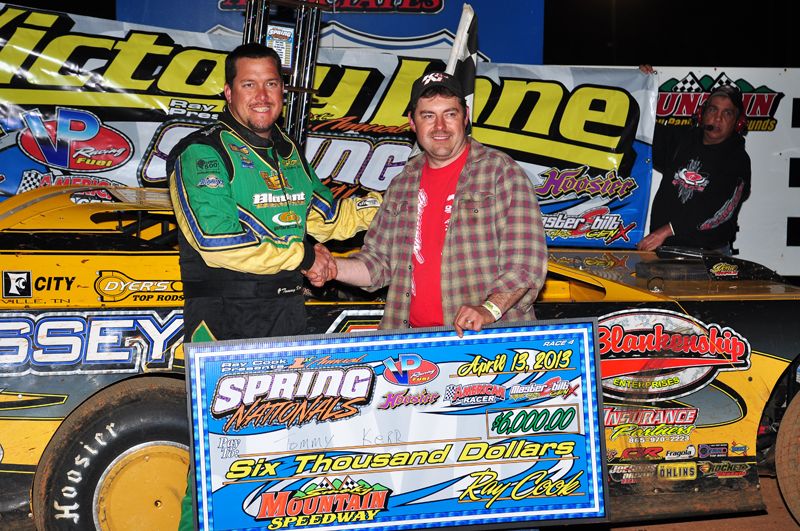 Just about three years ago, Tommy Kerr made the decision to cut back on his racing schedule in order to spend more time with his family. And it has been a decision he has never regretted.

Now, the Maryville, Tenn. native races occasionally in events such as this Saturday’s Ultimate Super Late Models Series “Tearin’ The Tops Off” $5,000-to-win show at the Smoky Mountain Speedway. It will be only the third start of 2014 for the 40-year-old driver who once raced as often as 60 to 70 times annually.

“Three years ago I took a different approach on life,” Kerr explained. “I love racing, but I’ve got two beautiful kids and a beautiful wife and it was time for me to do something different or I was going to have kids that were grown up. When I was young, all I thought about was racing. But when I got kids myself, I saw that there was more out there than just racing. I took this step back from the racing side of my life, and man, I’ve enjoyed it. Don’t get me wrong, I still really love racing.”

Kerr has found plenty of success behind the wheel of his Blount Motorsports Rocket. He has won over 60 feature events and was the 2009 Southern Nationals champion over the course of a career that has spanned more than 20 years. But that success came at a price.

Not only did Kerr race often, but he worked a day-to-day job for Larry Garner’s Blount Excavating operation.

“It was like I had two jobs,” Kerr declared. “I worked for Blount Excavating, and we were gone on the road racing all the time. I have really taken a liking to the excavating side of it and have taken on more responsibility with the Garners. I’ve got myself knee deep in the excavating company, and that’s where my money comes from.”

The removal of some of his racing duties has allowed Kerr to build stronger relationships with wife Kelly, son Jake, and daughter Kaylee Ann.

“Now I mostly just race at Smoky Mountain, Bulls Gap and Tazewell,” Kerr said during an interview conducted prior to an earlier race at Smoky Mountain. “Each night my son gets to come with me. I went to go watch him play ball today and now we’re here at the race track tonight. Three years ago, I’d be gone out of town and I didn’t have that privilege. I just feel fortunate that three years ago I saw that I needed to do this. I do miss the travel part of it and meeting people, but my heart’s in other places. I feel like I’m doing the right thing in what I’m doing. I’m having fun when I do race where three years ago when we raced 60 and 70 times a year, it was a job.”

And being away from racing has made those times when he is at the track even more special. The sensations of speed and competition that come from racing are heightened as a result of his breaks from the sport.

“Racing is an adrenaline high,” the driver explained. “There are druggies out on the street who look for that high. Racing is an addictive high like that. You really enjoy the high that you get off of racing.”

But when the time comes, will Kerr encourage his own son to get involved in racing?

“My son each and every day talks about wanting to race,” he stated. “When we put this deal together with Mr. Garner and his son, Steve, our intentions were someday for my son, Jake, and Steve’s son, Brock, to get in a car at some point. I’m sure someday I won’t be in a car, but I’ll be here telling boys what they’re doing right and what they’re doing wrong.

“I don’t push racing on my son and I know Larry doesn’t push it on his grandson, but the opportunity is here if they want to do it. I could see both of them racing or I could see one of them racing and the other one working on it all the time.”

Kerr believes there can be lifelong benefits for youngsters who get involved in racing or any other sport.

“I think whether it’s racing or baseball or whatever, it’s good to educate our kids about sports. I know that when I was a kid that’s all I thought about and I believe it has been good for me. I think we need more kids getting involved in racing and learning what all there is to learn from it.”