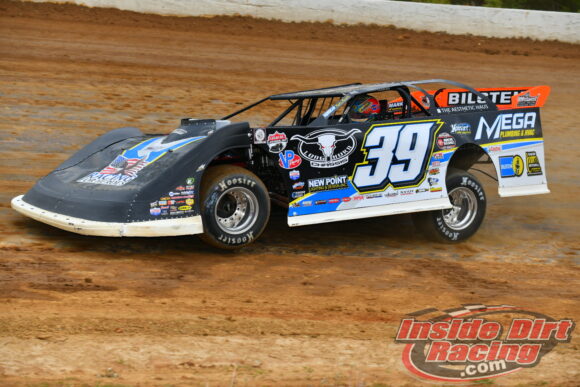 Tim McCreadie earned $10,000 for his win in Richmond

The World of Outlaws Morton Buildings Late Model Series made its way to Kentucky on Friday night to begin a two-race weekend. At the end of the night, it was Tim McCreadie who scored a flag-to-flag win at Richmond Raceway. The Watertown, NY driver earned $10,000 for his efforts.

A total of 30 cars were entered in the event.

Chris Madden was fastest in Group A qualifying after he toured the 3/10 mile clay oval in 15.329 seconds to best the efforts of Scott James, Zack Dohm, Tim McCreadie, and Brandon Sheppard.

It was Tommy Bailey who led Group B time-trials with a time of 14.491 seconds topping Brandon Overton, Tanner English, Ricky Weiss, and Tyler Bruening.

Bailey’s car was docked one row for his heat race when officials deemed that the rear deck was too high.

Chris Madden took the win in the first heat ahead of Zack Dohm, Brandon Sheppard, and Michael Chilton while Tim McCreadie was the victor in the second preliminary over Scott James, Cade Dillard, and Kyle Strickler.

At the start of the 50-lap feature it was McCreadie who jumped out to the early lead with Madden, Bruening, Weiss, and Larson following in his tire tracks. However, a caution at the end of the first lap for Linville briefly slowed the pace.

On the restart, James and Dohm fired past Larson to grab fifth and sixth respectively. James continued his march forward as he got the high line working to pass by Weiss for the fourth position on the third lap.

McCreadie began pulling away from the field by lap 5 while Bruening, James, and Weiss engaged in a fierce battle for spots 3-5. On lap 8 James got around Bruening to take third.

Further back in the pack, the fight was on between Dohm, Larson and Overton for positions 6 through 8.

Weiss went around Bruening to claim fourth on lap 13.

After the race moved past the halfway mark, the front runners fell into single-file formation as they closed in on slower traffic.

A yellow flag with three laps remaining offered an opportunity for some late race drama but McCreadie was not to be denied. In the end, the No. 39 Longhorn sailed under the checkered flag to score the win.