The hot streak continues for Jimmy Owens at Golden Isles 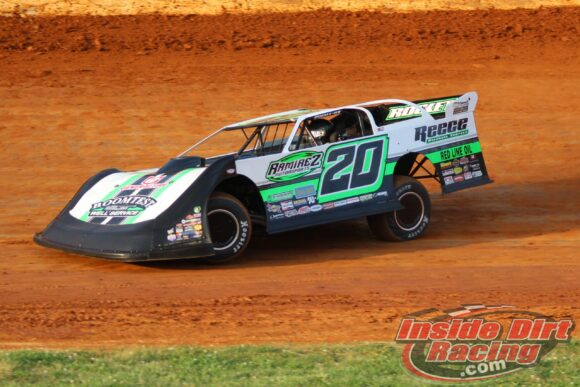 The Lucas Oil Late Model Dirt Series returned to action after a stoppage of 100 days due to the coronavirus epidemic when it made its way back to the Golden Isles Speedway for the second time in the 2020 season on Tuesday evening. When all was said and done, Jimmy Owens came away from the Brunswick, GA track with a $7,000 payday for his victory.

Josh Richards would start from the pole position when he took the win in the first heat race of the night over Mason Zeigler, Max Blair and Rick Eckert while Tim McCreadie topped Brandon Sheppard, Tyler Erb and Billy Moyer, Jr. in the second preliminary.

Brandon Overton earned a front row starting spot for the feature by beating out Tyler Bruening, Shane Clanton and Steven Roberts just before Jimmy Owens took the fourth and final heat ahead of Devin Moran, Jason Fitzgerald and Tanner English.

Mark Whitener won the first B-main by beating out Chris Ferguson and Shanon Buckingham then Jonathan Davenport outran Michael Norris and Ryan King in the final B-main of the night.

At the start of the 40-lap feature it was Overton who went to the early lead with Richards, Owens, McCreadie and Blair trailing. McCreadie took third away from Owens on the second lap then immediately went after Richards for the second position.

The top-4 of Overton, Richards, McCreadie and Owens ran in tight formation during the early laps on the high speed track. On lap 8, Richards powered by Overton on the outside line to grab the lead just before a caution on lap 9 for the slowing car of Shirley.

On the ensuing restart, Overton employed a slide job maneuver to regain the lead from Richards. Further back, Moran moved by Blair to take over fifth.

On lap 12 McCreadie and Richards engaged in a fight for second as Overton appeared poised to slip away from the pack. However, McCreadie eventually broke free from his fight with Richards and began cutting into the lead of Overton.

But on lap 23, things went wrong for McCreadie when he cut a tire due to contact with a slower car as he and Overton went three-wide with the lapped machine as they battled for the lead. The second running car slowed and had to go to the pit area then restart for the tail.

Owens challenged Richards for second on the restart just behind Overton. On lap 30 it was Owens who moved inside of Overton as the two drivers fought for the lead. The No. 20 Vic Hill Racing Engines-powered Rocket Chassis took the lead on lap 31.

Owens fought off a challenge from Overton following a lap 34 restart. But the red hot Owens got away, leaving Overton, Richards and Zeigler to fight for the runner-up position. Zeigler battled around both Richards and Overton to move into second but it was Owens who would win the race back to the checkered flag.