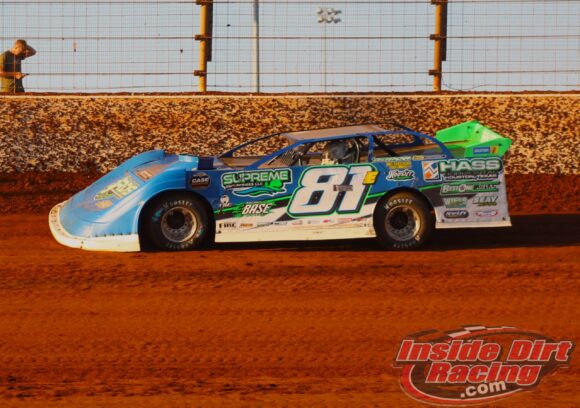 Tanner English led all 40 laps of the feature

Tanner English will soon be closing out his time as the driver of the Riggs Motorsports team but his team obviously hasn’t given up. The driver who secured second in the final World of Outlaws Case Construction Late Model Series standings led all 40 laps on his way to an impressive victory on Thursday evening at the Dirt Track at Charlotte. English also earned the tour’s Rookie of the Year honors.

The Rocket Chassis driver from Benton, Kentucky earned $15,000 for his efforts on the track located in Concord, NC.

A total of 68 cars were signed in for competition

Feature Re-cap: After the completion of the first lap it was English who held the lead ahead of Clanton, O’Neal, McCreadie and Madden. Charging early was Madden who took fourth from McCreadie on the second circuit. The racing action then settled into a rhythm as English continued to lead over Clanton, O’Neal, Madden and McCreadie after 10 laps were done.

After 13 caution free laps the front runners began to encounter slower traffic which bunched the top-5. Madden moved by O’Neal for third on lap 20 then Marlar wrested fifth from McCreadie one lap later. Marlar then took fourth from O’Neal on lap 25 while English was stretching out his advantage.

With less than 10 laps remaining, Madden closed in on Clanton to challenge for the runner-up position with Marlar also in the mix.

English would not be denied as the final laps clicked away. The driver of the No. 81E car is finishing out his time with Riggs Motorsports in a strong way.

The World of Outlaws CASE Construction Late Model Series will not be in action on Friday night but will return to action on Saturday in Charlotte.

Click the Play Button below to hear our interview with race winner Tanner English: