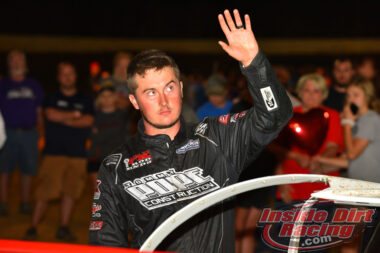 The second half of the 2022 season saw Tanner English and his Riggs Motorsports team prove themselves to be top contenders every time they unloaded their Longhorn Chassis machine. The Benton, Kentucky driver scored eight feature wins over the course of the campaign with all of those trips to victory lane coming after June. However, English and Riggs announced during that successful run that they would be parting ways at the end of the year with each going in a new direction.

During the past season, English and his No. 81E car scored some big victories. The 29-year-old driver earned $30,000 from a WoO Late Models show in Davenport, Iowa which was actually part of a weekend sweep at that track for the team. And this past week, a triumph in the World Finals at The Dirt Track in Charlotte netted another $15,000 in the team’s final races together.

English is set to join the Pennsylvania-based Viper Motorsports operation owned by Shane and Lisa Martin this weekend in the XR Super Series-sanctioned ‘Duel in the Desert’ on the dirt track located adjacent to NASCAR’s Las Vegas Motor Speedway venue. These events will serve as a precursor for the 2023 season.

“I can’t say enough about this car and this team,” English said of Riggs Motorsports following his win in Thursday’s World of Outlaws CASE Construction Late Model Series event at Charlotte.

Despite knowing that their relationship would soon be coming to an end, English and crew put their best foot forward right to the end.

“We’re trying just as hard as we ever do,” English explained during the World Finals. “That don’t deter me at all, I just try to win every race I’m at. It sucks to see it end after three years because we had a good run but all good things must come to an end. We’re happy to move on to Viper Motorsports and ready to get the next season started.”

English ultimately finished second in the final World of Outlaws standings behind Dennis Erb Jr. and was also awarded ‘Rookie of the Year’ for his 2022 achievements.

Now the transition to Viper Motorsports has begun. English plans to compete with is new team in Las Vegas then later in the Gateway Nationals in the Dome of the Americas in St. Louis. There will be very little time for that move to be made as the 2023 season quickly approaches.

“It’s short,” English pointed out of the off-season. “We’re actually going straight home and putting a motor in a car then we’re going to Vegas. We’ve got a one day turnaround when we get back home. It’s going to be all hands on deck so we can make it out there for that deal. We’re going to try to make some noise out there too. We’re also going to the Dome so it will be a short off-season, or actually not one at all. It will be more or less two or three weeks of building cars and getting stuff ready so we’re excited.”