This week’s driver is Rocky McNabb 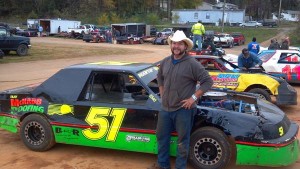 Rocky McNabb is one of the more well known support class drivers in the east Tennessee region. His success combined with a distinctive ‘Days of Thunder’ themed car causes fans to sit up and take notice every time he hits the track. The 30-year-old has raced primarily in Mini Stocks with a few runs in a Modified Mini over the past few seasons.

McNabb won the Mini Stock track championship at the 411 Motor Speedway in 2013. That trophy goes alongside one he earned in 2006 at the Atomic Speedway while driving a Pure Mini racer. The Lenoir City driver plans to continue in the Mini Stocks class in 2014, but he may also have a chance to drive a Late Model “if the stars line up right”.

“I started at Atomic in ’05 in stock cars, but I had raced go karts back in 2002 at Dumplin Valley. I started out in the amateur class and we got to doing pretty good. I eventually won so many races that they voted me out of the class.”

2. Why the Mini Stocks class?

“Coming out of go karts, Mini Stocks was a good transition, not too much power and it was a good way to learn the cars after being in that rigid go kart frame.”

“I like driving the Mod Mini. It’s fun but it seems like when somebody’s really hooked up, they’re gone. There’s just no catching them. In the Mini Stock, it’s like they don’t get away. You can at least run them down. The Mini Stock’s a good car, especially for beginners.”

“For me, it’s the competition and the challenge. I just like trying to get better and learning how the motor works, how the suspension works, just learning. And, of course, it’s always fun to go fast. But it’s the challenge that’s really rewarding to me.”

“It’s hard to narrow down to just one, but for any racer the first win is a big one. I still have a DVD of that race(2006 at Atomic). Matt Henderson was the guest announcer that night and he knew it was my first win ever. Every time I watch that, those emotions come back.”

“To be able to race for a living and not have to work. I understand that Late Models is where that would have to be.”

“I love to watch Ronnie Johnson. I watch how he races and I try to be as smooth as him. I’ve never heard anybody say anything bad about him or the way he races. And also, Owens and Bloomquist, you know, to make enough money from racing to provide for a family. That’s my goal.

“I also admire Derik Duggan. He has taught me more about driving than anyone else since I started in stock cars and is always a threat to win when he is on the track.”

“Last year when we were running for those points, it seemed like we were at the track or doing something to the car all the time when we weren’t working. I like camping and four wheeling with friends.”

“Sad. I don’t really have any other hobby. If our country turned communist next week and they said no more racing, it would be a sad world.”