This week’s driver is Philip Thompson 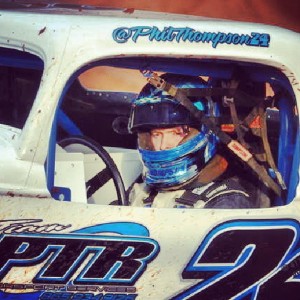 Philip Thompson has established himself as a force within the ranks of the Classics division over the past few years at the Tazewell Speedway and the 411 Motor Speedway. As a matter of fact, the 25-year-old driver scored ten feature wins in 2013 on those two tracks. The Knoxville driver plans to continue racing in that class during the coming season which will primarily have him competing on the high banks in Tazewell after 411 removed the Classics from its weekly program.

“I had appendicitis in April and that really set me back on the start of the season. I didn’t get to start when everybody else did. Then we ran one race and the motor blew up and that was another heavy hit. After that I started talking to a guy named Richard Bell and I drove his car, and we’ve formed a pretty cool partnership deal.”

“I’ve been around racing since I was six. That’s when my mom and my step dad(Robbie Sands) got married and he was racing then. I actually started racing when I was 17 myself.”

2. Why the Classics class?

“My step dad had been racing them for five or six years before I started. I was just kind of going with him and that’s how I got started in them.”

“The competition of it, I guess.”

“To race a super late model on some kind of a full time deal.”

“Chris Ferguson. I got to go to the World 100 with him back in 2011 and ever since then we’ve just hit it off and become really good friends. I’ve learned a ton through him in terms of the whole marketing deal and all that good stuff. And I’ve learned a lot as far as driving ability is concerned.”

“Play hockey. It’s like a community league team that I play for. I’ve been playing for about 18 months now.”

“I’d probably be doing something with custom or classic cars, I guess.” 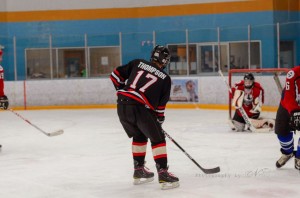 Philip Thompson enjoys playing hockey when he’s not at the track.