This week’s driver is Logan Dukes 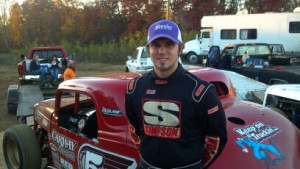 Logan Dukes is a proven winner in the Classics division at both the 411 Motor Speedway and the Tazewell Speedway. But 2014 will be a year of change for the 22-year-old Knoxville resident as he will make the move into Tazewell’s Sportsman class with a Rocket chassis and a 604 crate engine.

“We’ll be running at Tazewell most of the year, but I think we’ll come down to 411 and Smoky Mountain to run some of their crate races later in the year.”

“I started when I was 13, so this will be my ninth year.” And as far as his move into a new class, “I’m excited and very anxious to see how it goes. I think in time we’ll be able to do alright.”

2. Why the Sportsman class?

“The reason why we chose to run in the Sportsman class is because Tazewell is a track I have the most laps on, and I feel like it’s a good track for me to learn the car and learn how to work on the car at the same track instead of running different tracks.”

“For me, it’s a getaway. You can forget about everything that’s gone on in the week when you strap in the car and you can just go out there and enjoy driving.”

“This might be everybody’s answer, but for me, it has to be my first win. It’s was at 411 when it was asphalt. It was on Father’s Day and my dad was there and we got to enjoy it together.”

“Probably to win a NeSmith race.”

“It’s got to be Ronnie Johnson. Or if you want to go NASCAR, it would be my buddy Trevor(Bayne).”

“I would be doing full time missions work. If I wasn’t racing I’d probably take a couple of foreign missionary trips. I’d probably do more work in prison ministries on the weekends. But racing is working in the mission fields as well.”