This week’s driver is Adam Engel 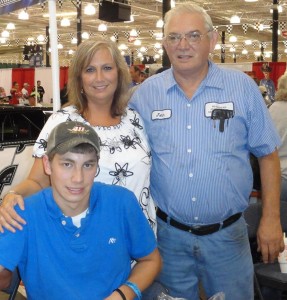 Adam Engel has proven himself to be a tough competitor at a young age. The 19-year-old Knoxville resident won many races at the 411 Motor Speedway in the Classics division before moving to the Street Stock class in 2013.

The 2011 Classics track champion says that he is looking to race on other venues in the coming season. “We’re not going to be confined to one track anymore. We’re going to try to go out and travel to local tracks to get experience at other places.”

“I’ve been around it my whole life. My granddad(John Buckner) owned a car back in the sixties that raced at Atomic. My mom(Cindy Engel) and dad always raced. My mom raced Pintos at Atomic and all over. I’ve just had a love for the sport since I was born.”

“I’ve been racing cars since I was thirteen. They had me in a go kart when I was seven, but I didn’t race them long. I was mainly a baseball player up to my freshmen year of high school.”

“We wish they would still run the Classics around but the reason we got out of that was because we would be confined to one track. I won a championship and accomplished a lot in three years in the Classics but we wanted to step it up a notch so we got this Street Stock.

“We’re running the Street Stock now because it was supposed to be affordable but any class you race in these days is not really affordable. We just want to have fun. This is what keeps the family together. It’s more of a family thing for us than anything.”

“The best thing about being a race car driver is having fans and getting to meet your fans. To see all the little kids run up to you and look up to you makes you feel good about yourself.”

“It would be nice to run NASCAR and make all that big money, but I’d like to at least make it up to Late Models. But we’re not going to spend that much money to go that far. If somebody wanted to help out, we’d try our best, but we’re just going to do what we can afford.”

“One of the good ones I admired was Scott Sexton before he passed away. But the one I listen to the most and take notes from is my own grandfather, John Buckner. He’s been around it longer than I’ve been alive so what he says goes.”

“I like to go four wheeling and hang out with friends and just have a good time.”

“If I wasn’t in racing, I’d probably be playing baseball.”