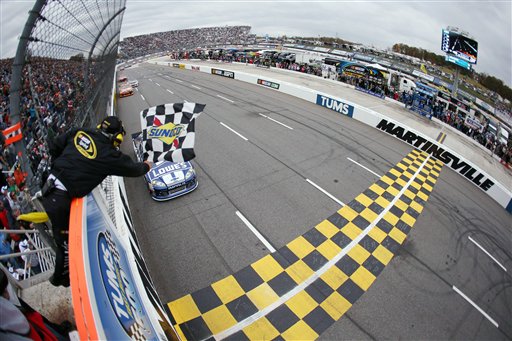 Races should end at the finish line

Go to pretty much any short track in America on a given Friday or Saturday night and you will see the winner of each race in each division determined at the only logical place for it to be determined- the finish line. So why then does the premier racing series in the sport of stock car racing have all these random places at which a winner can be determined?

Throughout the 2017 season NASCAR has seen its share of controversy in regard to the finish of races in its top divisions. The Xfinity Series race held on Friday night/Saturday afternoon at the Daytona International Speedway highlighted the issue when a late race caution and its resulting determination of young William Byron as the race winner drew the ire of numerous fans and even a few media members on social media.

Due to multiple yellow flags brought out in the closing laps of the Coca-Cola Firecracker 250, the race went into a so-called overtime session, which is NASCAR’s way of attempting to end races under a green flag condition despite having having gone past the number of laps meant to cover the race’s predetermined distance. It used to be that there could be a maximum of three attempts to finish a given race under green flag conditions before officials would call off the green/white/checkered scenario. However, the sanctioning body added a new rule at the beginning of the 2016 season after drivers and teams complained about the multiple attempts, which were believed to be the causes of accidents or of cars running out of gas because of the excess laps.

Now, an overtime line has been placed directly across from the start/finish line of most tracks. If cars have passed the overtime line when a yellow flag waves after an overtime restart, the winner is determined provided he/she can make it back to the checkered flag under caution.

With multiple races having ended under this very circumstance, fans have seemingly come to universally hate the rule. Twitter and Facebook have provided a platform to spew anger at the finish of these controversial overtime races.

Further, an Xfinity race earlier this season at the Richmond International Raceway caused confusion when a crash occurred during an overtime session after the cars had crossed the overtime line. A caution was called by NASCAR but the flagman did not display the yellow flag. Ultimately, it was decided that Kyle Larson was ahead of Justin Allgaier at the time of caution and he was named as the winner of the race. Some argued that Allgaier was actually ahead at the time of caution so the end result stirred even more race-ending controversy.

For his part, Allgaier’s crew even made sure to have the nose of their car in Daytona painted bright blue so that NASCAR officials could see it better should a similar situation come about.

It seems so simple to this writer that races should end at the finish line. While teams, drivers, and some fans will say that this could lead to too many additional laps at the end of a race, the current solution of using overtime rules isn’t making very many people happy.

If the G/W/C scenario is too distasteful then do as many short tracks do and only count green flag laps over the final ten circuits or so. Make it so that the running order reverts to the last scored lap should there be a yellow flag within that time period until the drivers finally make it to the finish line without a caution.

Doing so would add more suspense as factors such as fuel mileage and tire wear/strategies would come into play. And more importantly, it would assure an ending at the finish line and not some arbitrary line drawn on another part of the track or officials deciding who was ahead at the time the yellow lights came on.

Virtually every dirt track in America can do this so why can’t NASCAR?

Racers often use photos of themselves crossing the finish line with the checkered flag waving overhead as a personal momento of their victories. No one uses a photo taken of them leading when the yellow light comes on or when they crossed the overtime line when an accident occurred somewhere else on the track.