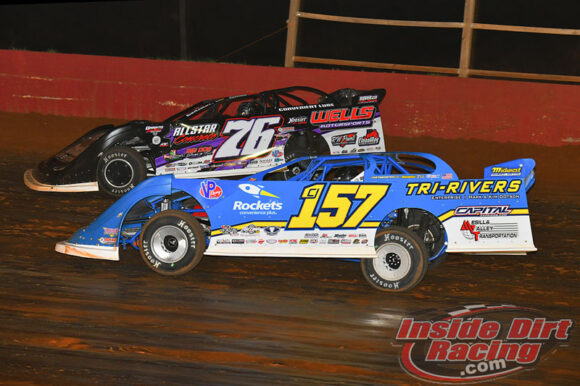 Mike Marlar(157) and Brandon Overton(76) are expected in Bristol

A recognizable quote from the baseball-themed movie “Field of Dreams” comes from an unseen voice that repeatedly whispers, “If you build it, he will come”. In Dirt Late Model racing, a similar quote could be made which would state something to the effect of, “If you pay it, they will come”.

The next two weekends will see action once again return to the dirt covered Bristol Motor Speedway for the XR Super Series-sanctioned Karl Kustoms Bristol Dirt Nationals and the field promises to include some of the most recognizable names in the sport. Four feature races will be contested over the next two Friday and Saturday evenings with each doling out hefty $50,000 payouts to the victors. And more, the driver who accumulates the most points in those four events will receive a bonus of $100,000.

Needless to say, those numbers have gotten the attention of top Dirt Late Model racers.

Dirt racing returned to Bristol in 2021 after a hiatus of two decades when the high-banked concrete track most noted for NASCAR competition was covered with clay for the primary purpose of staging the first Cup Series dirt race in 50 years. But while the facility was dressed in dirt, other types of racing including Late Models and Sprint Cars was held.

Now, the track is once again temporarily surfaced with clay so that the second Food City Dirt Race for NASCAR’s top level can be held. And again, other forms of racing are taking advantage of the opportunity to compete on the historic speedway. The money mentioned above along with the lure of racing at Bristol has served to draw in star racers.

One the Dirt Late Model racing’s most legendary figures, Scott Bloomquist, is expected to make his 2022 season debut on Friday. Also, Jonathan Davenport, Brandon Overton, Devin Moran, Jimmy Owens, and Tim McCreadie are among those thought to be on their way to east Tennessee.

There is a lot of money on the line as well as the opportunity for a driver to say that he won on one of the most storied tracks in motorsports. And the big names appear poised to show up.

Check in with InsideDirtRacing.com both weekends for live updates, race re-caps and feature stories.