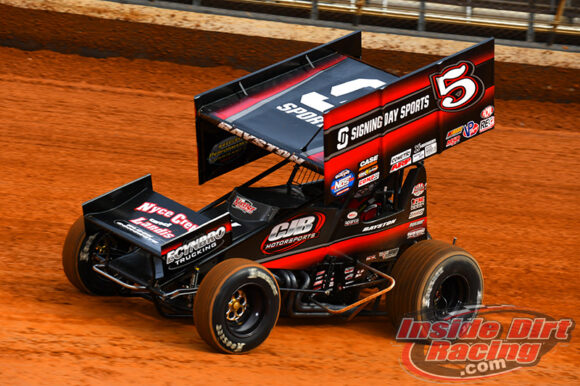 Spencer Bayston got his first WoO win of 2022

Spencer Bayston is in his first full season as a World of Outlaws NOS Energy Drink Sprint Car Series driver and on Saturday night at Bristol Motor Speedway he picked up his first victory of the 2022 campaign. The driver from Lebanon, Indiana earned a total of $25,000 for his efforts on the half-mile track in Bristol, Tennessee on the second night of the Bristol Bash.

Feature Re-cap: At the start of the 25-lap feature it was Bayston who went to the early lead with Larson, Schuchart, Abreu and Gravel trailing. Bayston built a lead of just over one second until he encountered slower traffic on lap 8.

Larson began to reel in the leader in traffic then began to look low in hopes of making a move with 10 laps remaining. Friday night winner Schuchart closed in on the lead duo as the laps clicked away. The top-3 ran in very tight formation over the final five circuits in a race that ran at a torrid pace.

As the cars took the white flag Larson and Schuchart were engaged in a fierce battle for the lead. Then, a caution flag waved for the slowing car of McFadden.

On the restart for the green/white/flag finish, Larson made a couple of valiant dives to the inside for the lead but Bayston held off the reigning NASCAR champion to claim his first win of the 2022 season.