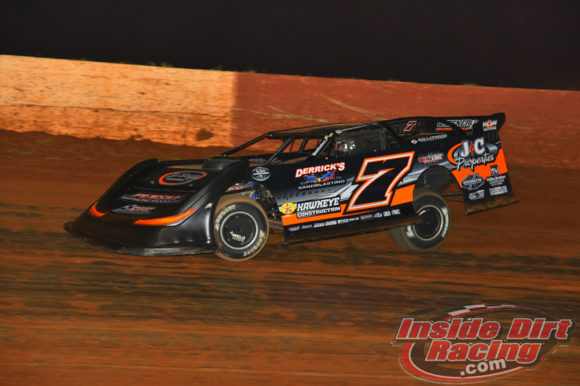 For the second consecutive weekend the Southern All Star Dirt Racing Series has made its way to east Tennessee. After a visit last Saturday to the I-75 Raceway in Sweetwater where David Crabtree came away with a dominating win, the regional tour headed to Maryville and the Smoky Mountain Speedway for a $7,500-to-win show on that historic track.

In the end it would be Canadian racer Ricky Weiss who overcame an early brush with the wall during hot laps and eventually left Smoky Mountain with the winner’s trophy after fighting back a late race charge by Shanon Buckingham.

David Breazeale entered Saturday night’s event with the lead in the series standings over Zach Leonhardi, Billy Franklin, Riley Hickman and Mark Dodson. Leonhardi headed up the Rookie of the Year standings for the series.

Live Updates for the Southern All Stars

A field of 26 cars signed in for action in the Super Late Model division on a warm Saturday evening.

Ricky Weiss earned the pole position for the main event by leading the way in Group A qualifying and overall after he posted a lap of 16.492 seconds around the 4/10 mile clay oval to beat out Skylar Marlar, Tommy Kerr, Eric Wells and Dakotah Knuckles. Those five drivers would be locked into the feature.

David Crabtree’s lap of 16.690 seconds beat out David Breazeale, John Blankenship, Shanon Buckingham and Derek Ellis. Those five racers would also be locked into the feature.

At the start of the 50-lap feature it was Weiss who shot to the early lead with Crabtree, Wells, Kerr and Breazeale trailing. The No. 7w car immediately set about the task of pulling away from his pursuers as he built an advantage of almost a full straightaway until a lap 5 caution for a spin by Wolfenbarger slowed the action. 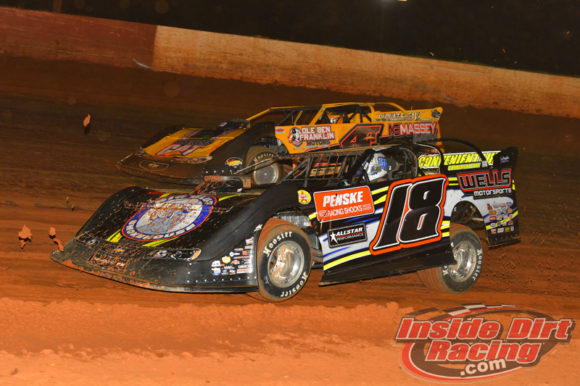 Eric Wells(18) and Tommy Kerr battle early in the race

On the lap 5 restart a hard charging Buckingham began to move forward as the Lucas Oil Late Model Dirt Series jumping up to the fifth position while Southern All Stars points leader Breazeale fell back to seventh.

On lap 8 Buckingham moved around Kerr to seize the fourth spot in the order while Weiss again went about the business of pulling away from the pack. Buckingham continued his surge when on lap 13 he drove by Wells to slide into third place.

Former World 100 winner Blankenship also worked to move up when he took fifth away from Kerr on lap 17 and was followed one lap later by Breazeale who grabbed sixth by passing Kerr.

Buckingham wasn’t finished yet. He took the runner-up position from Crabtree on lap 20 before a yellow flag would be displayed to the field on lap 23 when Henderson’s car came to a stop on lap 23. 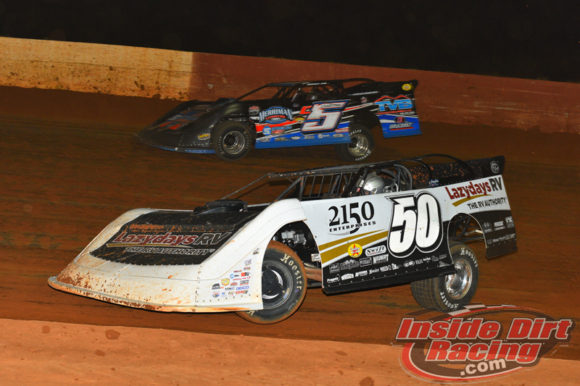 Crabtree moved back to second on the lap 23 restart. Shortly afterwards, the top-3 engaged in a fight for the lead with Weiss running the bottom, Crabtree running around the top of the track and Buckingham occupying the low line.

Weiss again pulled away by lap 32 leaving Buckingham and Crabtree to fight over the second spot which Buckingham would take on lap 34. After that, the No. 50 car gained on the front runner when Weiss found himself boxed in by slower traffic. Buckingham made a bid for the lead just after lap 40 but Weiss fought off the challenge and began to slip away.

Ultimately, Weiss earned his second victory of the year in a Southern All Stars race at Smoky Mountain when he drove under the checkered flag.