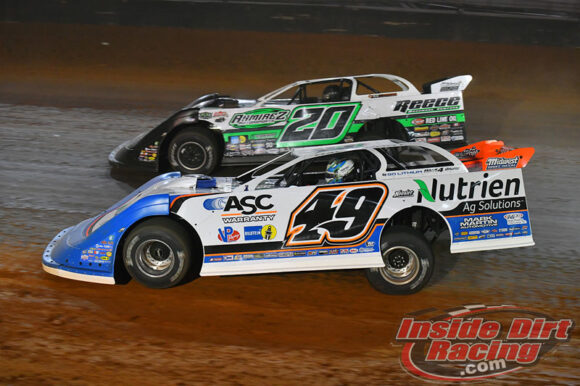 Not long ago at all, when one thought of reaching the peak of Dirt Late Model racing it was believed such was achieved by making it onto one of the two national touring series. And that is still very much the case for many who participate in this form of motorsports. But there may be a new way of thinking emerging among those drivers and teams who want to make the most of their racing seasons.

While racing on one of the national tours is still the goal of many, some appear to be aligning their schedules around the top paying races scheduled for each weekend in close proximity to each other no matter which organization may be sanctioning them. And often times, that calls for racers to compete with two or three different sanctioning bodies within just a few days time.

With the Lucas Oil Late Model Dirt Series, the World of Outlaws CASE Construction Late Model Series, the Castrol FloRacing Night in America and the XR Super Series all holding multiple races that pay $20,000 or more to the winner, there are typical multiple options to choose from during a given week. And if travel plans are laid out thoughtfully, multiple shows can be reached by driving to one section of the country.

Aligning a schedule around the races located in close proximity to each other offering better purses, no matter the series, can provide the best opportunity to earn bigger payouts with the least amount of miles covered. Doing so, however, might not allow a driver to stay on one particular series all year long.

But a team can still run a series while aligning other race events with that particular tour. Take the example of Brandon Sheppard and the Rocket Chassis house car team moving from the World of Outlaws Late Model Series to the Lucas Oil Late Model Dirt Series as an example. By running the LOLMDS, the No. 1 crew can also make most, if not all, of the midweek FloRacing Night in America shows.

Still others have forsaken the two traditional series either in favor of not running any single tour or for one of the newer tours. Jonathan Davenport and Jimmy Owens are former Lucas Oil champions who do not have all of that tour’s races on the schedules posted to their websites. Davenport is definitely not running that series after missing several of the Georgia-Florida SpeedWeeks events while Owens had planned to other races at times when Lucas Oil was racing somewhere else even before those events were rained out.

In 2021, Brandon Overton demonstrated that running a so-called pick-and-choose scheduled could be beneficial as the Wells Motorsports team garnered huge earnings while not running any particular series. But not everyone who tries to follow in those footsteps can win at the clip ‘Big Sexy’ did last season and attempting to do so could have repercussions.

Keep in mind that there are definite benefits to racing on a series. Those who stick with a tour receive provisional starting positions that essentially guarantee they will make the field after hauling their equipment to a track that may be hours from their shops. More, many receive “tow money” to help offset the expenses of travelling to each show. Other sponsor-driven bonuses are often available to those who follow the series.

In a story posted to this website earlier this year, Jonathan Davenport mentioned the benefits of running a series on a full-time basis as he described his reasons for not doing so in 2022.

“It’s really not smart for me because just looking at percentages and things like that,” Davenport admitted. “I’m guaranteed money to show up, I’m guaranteed a provisional. If it’s a $1,000-to-start race and Lucas gives $800 to show up, I’m guaranteed $1,800 to just roll it out of the trailer. If you go to a $5,000-to-win race you’ve got run at least third to get that money and you’re not guaranteed to do that. From that standpoint, it might not have been the best decision for me but I think we can have a better quality of races with less quantity.”

Even with that, some are choosing to go wherever the money is rather than trek long distances from home to a series race that could be jeopardized by weather. But the driver known as ‘Superman’ pointed out in that same piece linked above that the money he will be racing for this season is extraordinary.

“For the rest of the year, when I leave home we’re going to race for 20 grand or more,” he explained prior to an Ultimate Southeast Series event at Smoky Mountain Speedway in Maryville, Tennessee. “That’s what our sport has come to, which is awesome. We can take off a week or two to prepare for the $50,000, $100,000 and $1,000,000 race and really focus on those.”

For some, racing on one of the two traditional national touring series remains as the culmination of years of hard work. But others are opting to seek bigger paydays over chasing a series. Perhaps beginning last year, the way teams go about doing their scheduling is not quite the same as it has been in year’s past.