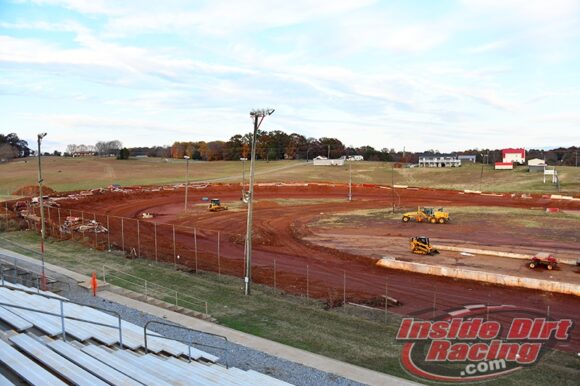 Smoky Mountain Speedway is being shortened to a 3/8-mile track.

In recent years, Smoky Mountain Speedway has established itself as a top venue for major dirt racing events. That fact was highlighted last season when the Maryville, Tennessee facility hosted the most lucrative event in its history when the Lucas Oil Late Model Dirt Series contested a $50,000-to-win feature race that was ultimately won by Chris Madden. The World of Outlaws CASE Construction Late Model Series and several top regional tours have also staged shows there in recent seasons.

After having been part of a ownership group that ran the speedway for several years, Roger Sellers became the sole owner of Smoky Mountain in 2018. Since, the former proprietor of a highly successful RV dealership has invested in a number of improvements of the facility. Additional grandstands have been added along with improved concession and vendor areas over the past couple of years.

But Sellers wanted more for the track and now the project that will take the track from its 4/10 layout to a new 3/8 mile layout is underway. The changes will be completed in time for the 2023 season opening event. This will actually be the second such reconfiguration for Smoky Mountain from its earliest beginnings.

“If you’ll remember the history of it, it was a half-mile asphalt track in the beginning and NASCAR raced on it,” Sellers explained in an interview with InsideDirtRacing.com. “Then when it turned to dirt, it was a half-mile dirt and it was so big they ended up cutting down (turns) one and two to shorten it to a four-tenths. What I’m doing is taking down three and four and pulling that end in to make it a three-eighths. What that does for it is it centers up all the grandstands where the track kind of went far to the left of the grandstands. Now it centers it up and brings all the action right there in front of the grandstands.”

Smoky Mountain’s long straightaways have been known for generating high speeds in this era of aero-dependence. At the same time, the difference in banking and width if the track from one set of turns to the other may have also played a role in competition. Both of those areas are being addressed by the new configuration.

“It’s going to shorten it roughly from 450 feet to 300 feet on the straights now,” Sellers pointed out. “The banking is going to be the same as one and two. Three and four were completely different banking. We’re going to make it progressive banking in three and four just like it is in one and two.”

Like many other tracks, a portion of SMS will not have an outside retaining wall. But to make sure the facility is as safe as possible, Sellers has instructed the excavators to lessen the drop-off for those cars that might go off of the racing surface.

“Originally, I was going to take that wall down and move it in but it was too big of an undertaking so we ended up having to demolish it,” the track owner stated. “What I’ve decided to do is, instead of putting a wall up there, I’m going to make a real gradual slope off the back side so that if a car goes off they can just drive back on. There’s not going to be a sharp drop-off on it. There’s a lot of tracks like that across the country.”

An added bonus for the track and its fans could come from the gains made in car counts in the support divisions that will be scheduled to race on the same nights as the main event classes.

“I definitely do,” Sellers declared when asked if the new layout might help draw more support class drivers. “Some of those guys run rear ends that make it difficult to go from one track to another. I think it will definitely help that and the Modifieds too. When we get the Mini-Stocks down there, they start out with 25 of them but we end up with 10 because it stresses the car too much.”

The 2023 schedule for Smoky Mountain Speedway will be released soon.