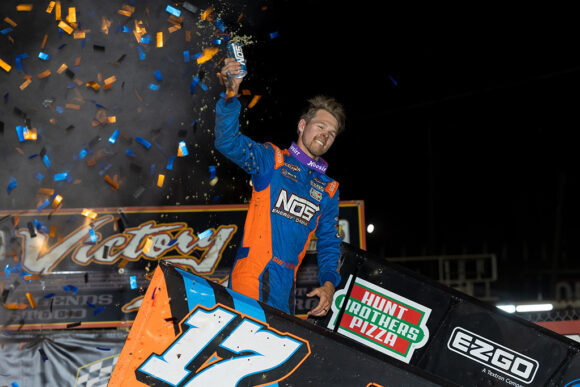 It’s a trio of tracks that most describe as “The Big Three” of World of Outlaws NOS Energy Drink Sprint Car Series facilities, all home to the three biggest events on tour.

He’s now stood in victory lane at all three tracks within the last three months.

His latest conquering came on Friday night at Mechanicsburg’s tricky paper-clip 1/2-mile. The Wooster, OH native put together an impeccable run by setting Slick Woody’s QuickTime and leading all 25 laps of the NOS Energy Drink Feature on night one of the Champion Racing Oil Summer Nationals.

Sheldon’s trip to victory lane officially makes the Haudenschild’s the first father/son duo to both win a World of Outlaws race at Williams Grove Speedway. His father Jac previously won with The Greatest Show on Dirt here in 1986 and 1997.

“I feel like I have a lot of laps around this place, but I could never get that win,” Haudenschild noted. “We’ve been close, but it feels great to finally pull one off. Makes it sweeter that the #69 was behind us.”

Earning the pole after dominating the DIRTVision Fast Pass Dash, Haudenschild quickly set sail as the $10,000/Win Feature fired off. A pair of stoppages on Lap 1 and Lap 6 slowed the action before the final restart rolled back to green with 19 laps left.

Lil’ Haud ripped the cushion and slid through lap traffic completely unchallenged for the remainder of the race, but all eyes were glued on PA Posse legend Lance Dewease. A rough Qualifying performance and fifth-place Heat finish led to the #69K starting 17th in the 25-lap Feature.

Dewease made it inside the top-10 on Lap 6, then flew into the top-five on Lap 18 and really made headway in the closing few circuits. He stormed by Schatz for third with two to go, then passed McFadden for the runner-up slot at the white flag.

Out front, though, there was no denying Sheldon Haudenschild and the Stenhouse Jr. Marshall Racing #17. He crossed the finish line with a margin of victory at 2.034-seconds over the field.

“My car was just great all night,” Sheldon added. “That’s the best I’ve ever felt around this place. I could really keep the car straight for the first time here. It really feels great winning on these big 1/2-miles. We’ve had a couple of rough nights, so it’s good to get back in victory lane.”

Fayetteville. PA’s Lance Dewease was the star of the show with an incredible 17th-to-2nd bid worthy of the KSE Racing Hard Charger Award. The Kreitz Racing #69K will look for more one spot better tomorrow night with $20,000 on the line at Williams Grove.

“It was 25 laps, that’s all that matters, and Sheldon won it,” Dewease offered. “We were good, but these guys are so hard to pass, you know they’re the best in the world. Coming from the ninth row to second, though, we’ll take that. We put ourselves in a hole with Qualifying, so this is a good end to the night.”

After starting third and running second for the majority of the 25-lapper, James McFadden slipped back to snag the final podium position aboard his Kasey Kahne Racing, Karavan Trailers #9.

“It’s nice to finally put a whole night together again,” McFadden said. “I’ve been struggling on restarts lately, and I finally got those back together night. We’ll move on to tomorrow and try to do better.”

Donny Schatz aboard the Tony Stewart/Curb-Agajanian Racing #15 and Brent Marks in his family-owned #19 closed out the top-five.

Rounding out the top-10 on night one of the Summer Nationals was David Gravel in the Big Game Motorsports #2, Carson Macedo in the Jason Johnson Racing #41, Brad Sweet in the Kasey Kahne Racing #49, Logan Schuchart in the Shark Racing #1S, and Danny Dietrich in the Gary Kauffman #48.

UP NEXT: The Champion Racing Oil Summer Nationals will conclude tomorrow night at Williams Grove Speedway as the World of Outlaws NOS Energy Drink Sprint Car Series squares off against the PA Posse with $20,000 on the line.