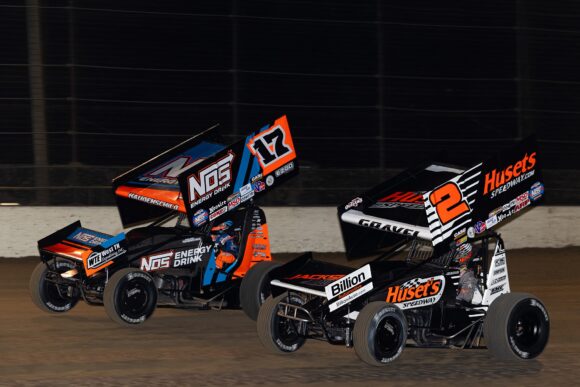 BARBERVILLE, FL – February 11, 2022 – The excitement of the World of Outlaws NOS Energy Drink Sprint Car Series was on full display on Friday night.

Hosting a race of the year candidate at Volusia Speedway Park, the DIRTcar Nationals Feature was highlighted by three different leaders over the final two laps at the Barberville, FL 1/2-mile. Simply put, it was an instant classic.

Reigning champion Brad Sweet was in the catbird seat with two to go, then points leader David Gravel asserted himself as he led the white flag lap, but ultimately it was Sheldon Haudenschild inching out the victory by forty-four one-thousandths of a second (0.044) at the checkered flag.

The epic ending promptly sent the massive crowd into a frenzy at Volusia and lit social media ablaze with praise as the Stenhouse Jr. Marshall Racing, NOS Energy Drink #17 pulled into victory lane.

“What a wild race,” Haudenschild said to a standing ovation. “Man, that was so much fun. Those two were gassing it up and I can only imagine how it looked from the stands. I’m really looking forward to this year. We’ve got a great group focused on having fun and winning races.”

Albeit a heartbreaker, Gravel’s runner-up effort was wildly impressive considering the circumstances. Losing the right front shock at halfway, the 29-year-old veteran never wavered and instead adapted to the ever-changing Big Game Motorsports #2.

The Watertown, CT native set Slick Woody’s QuickTime, won the DIRTVision Fast Pass Dash, and led 22 of 30 laps, including at the white flag. However, the holes ate up his unbalanced machine coming to the checkered flag and created a big bobble, allowing Haudenschild to square him up and cross him over to edge him at the line by 0.044 seconds.

“I knew on that last restart with 16 to go that my right front shock was gone, but damn I wanted to win this race,” a motivated Gravel said. “When I could haul ass and get this thing to lay left it was still amazing, but when I slowed down and got into the holes that’s where I gave it away. We weren’t going to stop fighting for that one. I hope everyone enjoyed that!”

Although it’s only the second of 90+ races, a noteworthy feat is that Gravel escaped with the points lead for the first time in his World of Outlaws career. It’s a long road until the $200,000 championship check cashes after World Finals in November, but DG and Tod Quiring’s Big Game Motorsports group have proven they’re ready to reach the mountaintop.

Closing out the trio of tremendous drivers on Friday’s podium was Brad Sweet, who rebounded from a rough opening night 16th to finish third on night two. The Kasey Kahne Racing, NAPA Auto Parts #49 controlled Laps 22-28, but costly mistakes in turns one and two combined with the pace of lap traffic ultimately cost The Big Cat his 75th career win.

“Wow, that was a really fun race,” Sweet noted afterward. “You hate to come up short, but Sheldon and David did a phenomenal job. I struggled as I got to traffic with my pace and couldn’t get off turn two as well as them. These last five to seven laps are what wins and loses races in this Series. I was searching and that’s not a feeling you want late in the going. We’ll get better for tomorrow.”

Earning their first top-five finishes of the season was Carson Macedo with a KSE Hard Charger Award from 16th to fourth in the Jason Johnson Racing #41, and Jacob Allen with an impressive fifth-place bid aboard the Shark Racing #1A.

UP NEXT (Sat) – The World of Outlaws NOS Energy Drink Sprint Car Series will conclude the 51st DIRTcar Nationals on Saturday night at Volusia Speedway Park in Barberville, FL. For those unable to attend, you can watch every lap LIVE on DIRTVision.