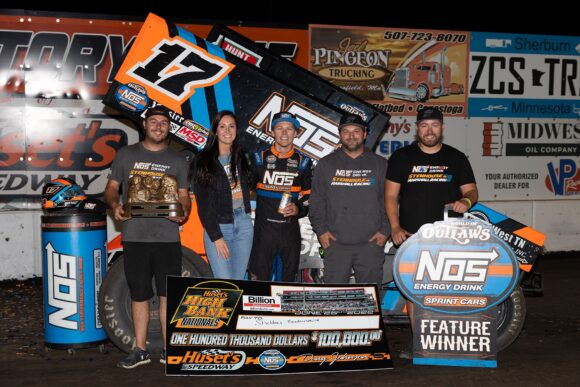 BRANDON, SD – June 25, 2022 – In fitting fashion, Sheldon Haudenschild did what no other driver dared to do with $100,000 on the line Saturday night at Huset’s Speedway’s inaugural High Bank Nationals.

Running sixth with four laps left, many assumed the Stenhouse Jr. / Marshall Racing, NOS Energy Drink #17 had no shot at the big payday. But if there is anything to have been learned through 45 years of World of Outlaws history, it’s that you never, ever count a Haudenschild out.

Taking a page out of the book written by Hall of Fame father, Jac, Sheldon throttled up and ripped the “Haud Line” around the outside of Brad Sweet for fifth, then Carson Macedo for fourth, then David Gravel for third, and that was only the beginning of his miraculous charge.

With the white flag waving, Haudenschild went to the faithful cushion one last time and made a two-for-one move, storming by both Buddy Kofoid and James McFadden in one swift swing to steal the $100,000 paycheck out of turn two on the 40th and final lap.

With the entire crowd on their feet in disbelief, the 28-year-old Wooster, OH native crossed the checkered flag to claim the biggest win of his life. Collecting his thoughts in victory lane, The Wild Child’s Child could only express his gratitude for the Stenhouse Jr. / Marshall Racing team that has believed in him for five years now.

“I don’t even know what to say,” Haudenschild thought. “[Kyle] Ripper is the man. This would not be possible without Ripper. He’s been there from the start for me, and I can’t begin to tell you how thankful I am for him and everybody that took a chance on me. Lauren [Albano], Ricky [Stenhouse], Richard & Jennifer [Marshall] trusted me from the beginning. I was a rookie with zero wins and they hired me, and that was five years ago now.

“We’ve been putting in the work for a long, long time. This wasn’t an easy week for us, but we never gave up. I thought what the hell, I had nothing to lose there at the end. I realized my tire was holding on and remembered it wasn’t a points race, so I figured I had to send it.

“I honestly almost gave up on myself when Brad [Sweet] got me and pushed me out of the top-five. I just started sending it into the cushion and realized this is what we had been doing all week long, passing cars. I think it was a blessing in disguise with how much we had to work because we learned how/when/where to pass guys while most of these cars were up front all week.”

Long before Sheldon’s breathtaking last-lap heroics, Carson Macedo controlled the opening 34 laps of a rather calm battle at the front aboard the Jason Johnson Racing, Albaugh #41. However, the business quickly picked up in the latter stages of the race as Budd Kofoid and James McFadden took him three-wide for the race lead on Lap 35.

Kofoid, who won his first-career World of Outlaws race on Thursday, briefly held the top spot while sneaking below Macedo in his Crouch Motorsports #11. It didn’t last long, though, as McFadden blasted the outside in the Roth Motorsports #83 and barely beat Kofoid to the stripe by 0.041-seconds.

While Macedo faded, it appeared to be one-vs-one for the paycheck between McFadden and Kofoid, but they were snookered on the final lap as Haudenschild went full send on the cushion and took it through turns one and two to pass them both.

Ultimately, McFadden finished 0.671-seconds behind Haudenschild on the dramatic last lap and claimed $30,000 for his runner-up efforts. It was his second, second-place finish of this week, this one in the most heartbreaking of fashions as $100,000 and his first win of the season slipped through the Australian’s grasp.”

“I’m just disappointed,” a dejected McFadden said. “I got the lead when it started taking rubber I thought I should just play it safe in traffic, but I should’ve known better. We really needed that win for myself, this team, and Dennis & Teresa [Roth]. Second is alright, but leading to the last lap for $100,000 and losing it just sucks. We’ll keep putting ourselves in this position to contend for wins and they’ll eventually come.”

Capping off a career week in third place was Buddy Kofoid in the Crouch Motorsports #11 with $20,000 in earnings. The Penngrove, CA 20-year-old opened many eyes this week against The Greatest Show on Dirt.

“Besides losing $80,000, I guess third isn’t too bad,” Kofoid kidded. “All in all, what a week for us. Brad [Alexander], Blade [Kearns], and I have run less than 10 races together and now we’ve won, ran fourth, and finished third in my first real big World of Outlaws race. It kind of stings, though. I got by Carson and thought I could really win, but then I had to fight James, and in the middle of that Sheldon somehow snookered us both on that last lap.”

Rounding out the top-five at Huset’s was David Gravel in the Big Game Motorsports #2 with a $15,000 payday, and early leader Carson Macedo collecting $10,000 for a fifth-place finish in the Jason Johnson Racing #41.

Sheldon Haudenschild’s 30th career World of Outlaws NOS Energy Drink Sprint Car Series victory brings him into a tie with Bobby Allen for 21st on the All-Time Win List. It was his eighth win of the season, already matching his career-best through only the first 32 races.

For the fourth consecutive race in as many nights, a Huset’s Speedway Feature offered three different leaders with Macedo leading Laps 1-34, McFadden controlling Laps 35-39, and Haudenschild only commanding the 40th and final lap.

Spencer Bayston and CJB Motorsports earned their first KSE Hard Charger Award of the season on Saturday by advancing eight spots from 22nd-to-14th.

Huset’s General Manager, Doug Johnson, announced during opening ceremonies that the second annual High Bank Nationals will offer the richest payday in Sprint Car Racing history. The World of Outlaws will return to the Brandon, SD oval on June 21-24, 2023 with a $250,000 top prize on the line.

UP NEXT (Fri-Sat) – The World of Outlaws NOS Energy Drink Sprint Car Series head back to Wisconsin next weekend for an Independence Day Spectacular on Friday & Saturday, July 1-2 at New Richmond’s Cedar Lake Speedway. Fans can BUY TICKETS HERE, or watch every lap LIVE on DIRTVision.