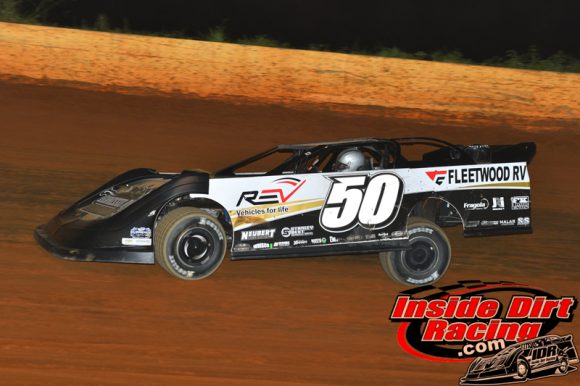 Shanon Buckingham won both features at Smoky Mountain on Saturday

On a night that he would also collect $7,500 for scoring the win in the Southern All Star Dirt Racing Series feature held at Smoky Mountain Speedway, Shanon Buckingham completed his double feature sweep by taking home $4,000 after a triumph in the Durrence Layne Dirt Late Model Series main event. The Double Down Motorsports driver from Morristown, Tenn. led a total of 100 green flag laps in dominating both races at the Maryville, Tenn. track.

Michael Courtney led the way in Group A qualifying for the Crate Late Model cars as he turned a lap in 17.513 seconds around the 4/10 mile clay oval to lock himself into the starting lineup for the feature along with Ross White, Greg Martin, Jason Deal and Eli Beets.

Buckingham was fastest in Group B and overall with a time of 17.301 seconds to earn entry into the main event along with Cameron Weaver, Jimmy Elliott, Jake Knowles and T.J. Brittain.

Josh Henry and Matt Steward won the two B-main events used to set the remainder of the starting lineup for the primary race. 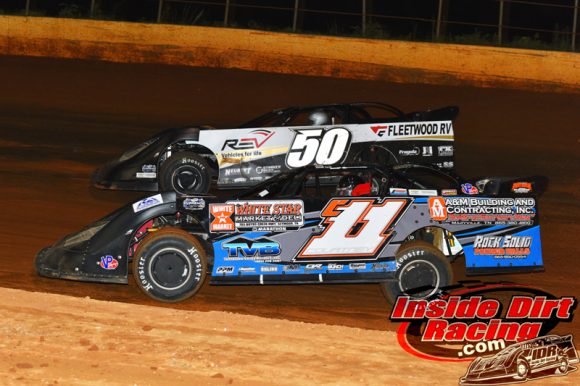 Buckingham took the lead from Courtney(c11) on the start from the outside of the front row.

Buckingham’s domination of the event began at the waving of the green flag as his No. 50 machine bolted to the front of the field with Courtney, White, Martin and Weaver in tow. Knowles, a three-time winner on the series this season, quickly went to work as he passed by Weaver to gain the fifth spot on the second circuit while Martin moved around White to take third at the same time.

Disaster struck Weaver on lap 4 when he found himself in the middle of a three-wide tangle that resulted in him spinning directly in front of the oncoming pack on the front straightaway. Henry and Jason Deal were collected in the melee. Weaver and Henry were eventually eliminated from the event as a result of the damage sustained. 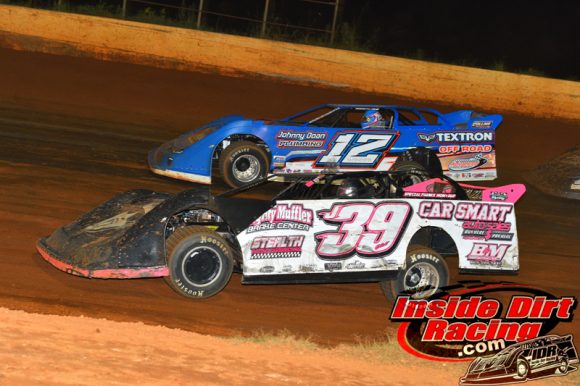 On the ensuing restart Martin seized the second position away from Courtney as Buckingham once again motored away from the field. Just behind, Jimmy Elliott moved into the top-5 just in front of and intense battle between White, Ashton Winger and current Durrence Layne points leader Cory Hedgecock raged for the sixth position.

The second caution flag of the night waved on lap 15 when Chip Brindle spun in turn two.

Buckingham and Martin again separated themselves from their pursuers on the restart with Buckingham building a comfortable margin. Further back, Hedgecock began to make a move forward as he took fifth from Winger then wrested fourth from Elliott on lap 29 and third from Courtney on lap 33. He eventually would move to the runner-up spot with a pass of Martin with ten laps remaining. 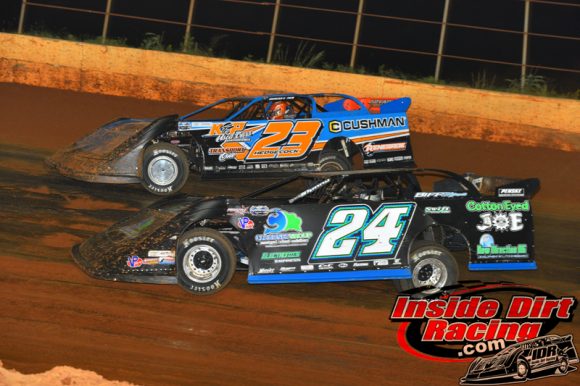 The final yellow flag of the race was displayed on lap 41 when White skidded to a stop on the front stretch seemingly setting up a late-race showdown between Buckingham and Hedgecock. However, Buckingham was just too stout and pulled away to take the victory and the winner’s trophy.