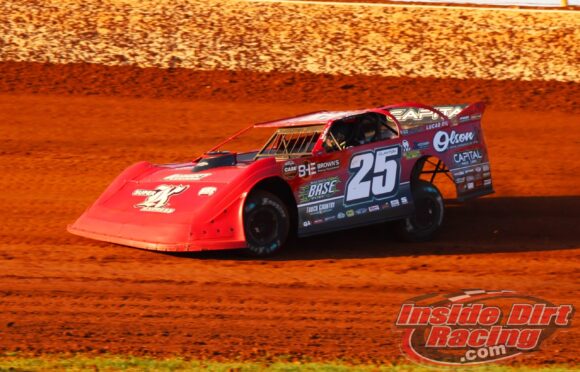 Shane Clanton earned $20,000 on the first night in Las Vegas

Shane Clanton added to his win totals with the XR Super Series on Thursday night when he took advantage of some late race misfortune suffered by Bobby Pierce then drove on to victory on the first of the three-night ‘Duel in the Desert’ event on the dirt track at the Las Vegas Motor Speedway. The ‘Georgia Bulldog’ had previously earned series wins on the Belleville(KS) High Banks, Wisconsin’s Gondik Law Speedway and Kokomo(IN) Speedway.

The Capital Race Cars driver from Zebulon, Georgia earned $20,000 from the 4/10 mile clay oval located in Las Vegas, Nevada in a race shown live by raceXR.plus.

Feature Re-cap: Clanton led the way after the completion of the first lap when the 40-lap feature got underway with Davenport, Pierce, McCreadie and English following in his tire tracks. McCreadie took third from Pierce on the second circuit just before a caution slowed the action.

On the restart, Davenport went high and lost several positions as McCreadie, Pierce and Overton passed by and set off after leader Clanton. Pierce passed by McCreadie for the runner-up position at the beginning of the third laps and quickly closed in on Clanton.

Pierce moved by Clanton to grab the race lead on lap 6 with a power move to the inside but Clanton quickly countered with a crossover move of his own to briefly regain the spot as McCreadie closed in from third to join the fight.

Pierce continued to show the way as the laps clicked away then suddenly fell off the pace with just four times around the track remaining. Clanton blasted by to assume the lead as Pierce’s car began to fade with a softening tire. From there, Clanton sailed on to victory.