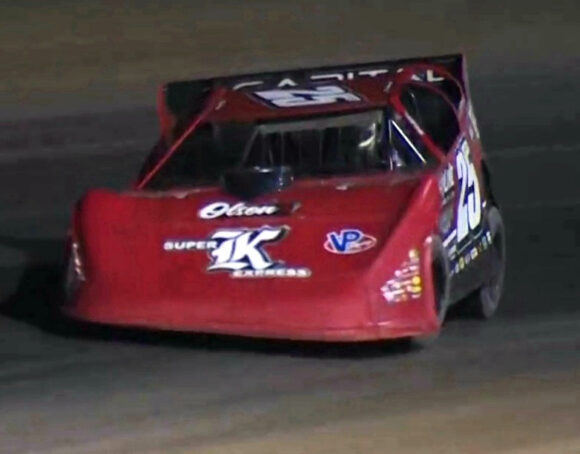 The final night of Florida SpeedWeeks for the Lucas Oil Late Model Dirt Series took place on Tuesday night at Bubba Raceway Park. At the end of the night, it was Shane Clanton who claimed the win after hard racing during the first half of the feature. The Zebulon, GA driver earned $10,000 for the victory.

Clanton recently had to spend more than a week in the hospital fighting coronavirus, earned his first feature win of 2021.

Jimmy Owens took the first heat victory and would start the feature after outrunning Tanner English, Tyler Erb, and Brandon Sheppard while it was Bobby Pierce who would claim the second preliminary ahead of Tim McCreadie, Jadon Frame, and Mike Marlar.

Jonathan Davenport, Josh Richards, and Brandon Overton transferred to the main event out of the first B-main then Rick Eckert took the second B-main ahead of Devin Dixon and Ross Robinson.

At the start of the 40-lap feature it was Owens who took the lead with Pierce, Clanton, English and Friesen trailing. Friesen wrested fourth away from English on the second circuit then took third from Clanton one lap later.

Clanton fought back and took third back on lap 4.

Pierce closed in on Owens, who slapped the outside wall off of turn two, and grabbed the lead away as they fought through slower traffic on lap 10. Furious action was the order of the day at that point as Pierce, Owens and Clanton waged war in traffic.

As the fight took place up front, English and McCreadie moved around Friesen for fourth and fifth respectively. However, a caution flag waved on lap 15 for the slowing car of Devin Dixon.

Clanton moved into second on the lap 15 restahrt but another yellow flag was displayed on lap 18 for Kyle Strickler. During that caution period, Richards stalled on the track and had to be pushed to the pit area.

Clanton made a move that netted him the lead when he passed by Pierce. The No. 25 car then took command of the race, leaving the rest of the pack to fight for other positions. English got by Owens on lap 29 for third then the defend series champion gave up fourth one lap later to McCreadie.

But over the closing laps Clanton would go unchallenged as he sailed under the checkered flag to score his first Lucas Oil win in more than a year. He was the eighth different winner in the nine LOLMDS features held during SpeedWeeks.

“Hats off to Bubba and his guys,” Clanton said of track owner Bubba Clem in his post-race interview. “They gave us two grooves. The top took a little bit to come in, it was a little bit greasy up there, but when it did it came alive. We worked our butts off trying to get by Bobby there. We just made the right move at the right time.”

The driver who had previously won a World of Outlaws Morton Buildings Late Models Series race at this track, credited his experience for the win.

“It’s a tricky place to get through three and four down there,” Clanton pointed out. “We done pretty good, I guess, tonight. Last night we sucked, but we changed a lot of stuff on the car today and it worked out.”