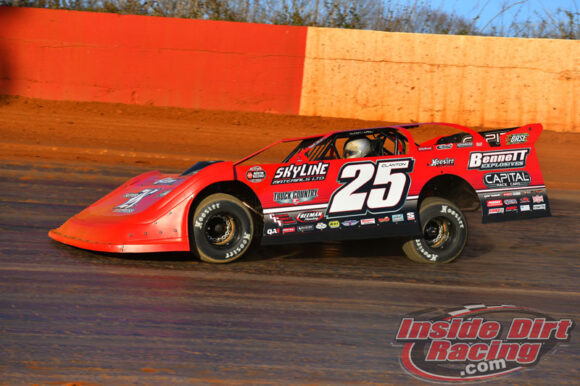 On a Thursday evening when the track known as the ‘Sprint Car Capital of the World’ hosted the first night of the Lucas Oil Knoxville Late Model Nationals, the racing proved to be top dominant and wide open around the historic Knoxville Raceway which opened the door for pole starting Shane Clanton to score a preliminary victory. After a second night of preliminary action on Friday, the Lucas Oil Late Model Dirt Series will eventually contest the $50,000-to-win Knoxville Nationals on Saturday night.

The Capital Race Cars driver from Zebulon, Georgia earned $7,000 for his efforts on the half-mile track located in Knoxville, Iowa in a race aired live by FloRacing.com.

Points earned by drivers during the action held on Thursday and Friday will go toward setting lineups for Saturday’s racing action.

Feature Re-cap: The 25-lap feature got underway with Clanton leading O’Neal, Pearson, Davenport and McCreadie. Davenport moved forward on the second lap when he got around Pearson to take over the third position. But the action would slow after three completed laps when Madden’s car dropped off the pace to bring out a yellow flag.

Pearson regained third on the restart to fall in behind Clanton and O’Neal. O’Neal would then close in on Clanton to challenge for the lead until a caution was shown to the field on lap 10 when O’Neal slowed.

Pearson and Davenport assumed second and third with O’Neal’s departure with Sheppard and McCreadie rounding out the top-5.

At the halfway mark, Sheppard moved into challenge Davenport for third but the World 100 winner held the spot. At the same time, Pearson was keeping Clanton in his sights as the leaders closed in on the tail of the field.

Even though Pearson closed in late, Clanton would ultimately cruise under the checkered flag to claim the win.