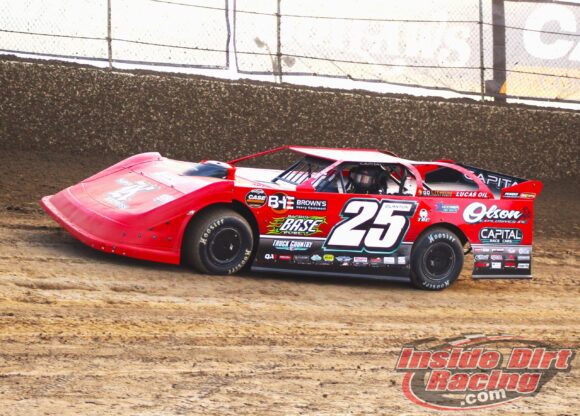 Shane Clanton fought off a challenge from Tyler Erb to score this third XR Super Series win of the 2022 season on Monday night at the Kokomo Speedway. It was the first of a two-day event in the lucrative Kokomo Dirt Nationals on the track most noted for Sprint Car and Midget competition.

The Capital Race Cars driver from Zebulon, Georgia was awarded $20,000 for his efforts on the quarter-mile track located in Kokomo, Indiana in a race shown live by raceXR.plus.

A total of 42 cars were signed in for competition

Feature Re-cap: The 40-lap feature took the green flag with Overton leading McCreadie, Tyler Erb, Owens and Clanton. Erb jumped to second on the second lap amid a furious battler of the top-5 runners behind Overton.

Taking to the high side of the track, Clanton charged all the way from fifth to the lead of the race by lap 5 with Overton, Erb, Owens and McCreadie trailing. Just outside the top-5 came the battle for sixth between Thornton and Davenport.

Clanton began to slip away from his pursuers until he caught the tail of the field just past the quarter mark of the feature. Overton and Erb exchanged second at lap 15 with Owens, Davenport and McCreadie involved in a fight of their own for positions 3-5.

The battle was intense at the front of the field on lap 25 as Erb moved to the low side and pulled alongside the high running Clanton as they wrestled for the lead of the race as they worked through slower traffic. In the meantime, Owens was working to hold back Overton and Davenport for the third spot.

A lap 27 caution for the slowing car of Shirley offered the leaders a reprieve from their battle and bunched the field. Erb briefly took the lead on the restart as he, Clanton and Owens went three-wide battling to control the race pace. Two laps later, Clanton would return the lead with Erb and Owens right on his heels.

Over the closing laps, Clanton continued to run right around the outside wall with Erb working both the top and bottom of the track and Owens staying glued to the very bottom.

Clanton would eventually sail under the checkered flag to claim the win.