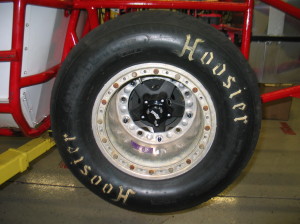 Choosing the right tires is key in dirt racing.

It goes without saying that there are big differences between NASCAR and dirt late model racing. But among those differences, that of tire selection has to be one of the most obvious and most important.

In NASCAR, everybody is handed the same Goodyear tires(or at least that’s the story) to race on for a particular weekend. There are no choices of compounds and there is only one supplier of racing rubber. And while changes will occur throughout the weekend due to temperature and other factors, the asphalt surface being raced on is fairly predictable in that form of racing.

In dirt racing, however, none of those same aspects apply. No one hands out the tires to the teams there at the track. Instead, they are responsible for their own tires. And in some races, there may be a choice between Hoosier and American Racer branded rubber. Furthermore, no matter how many brands may be allowed by the series or track running a particular event, there will almost always be multiple compounds to choose from.

So how do teams make the right choice to get them through the race distance without failure while producing maximum speed?

In this article, three of east Tennessee’s top crew chiefs weigh in on tire selection and the process they go through to make sure their cars are on the best footing possible. All of these team leaders indicated that there are three essential pieces of knowledge that go into their decision making. According to each, it is essential to understand the track, to understand the tendencies of the driver, and to understand the makeup of the tires themselves. 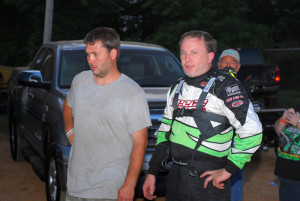 Chris Fox has worked with driver Jimmy Owens since the earliest days of both their careers in the sport. Often times when being interviewed from victory lane, the driver has remarked that his crew chief chose the right tires for that particular race.

“He started racing in 1993,” Fox recalled in a recent interview. “He took me along with him when I was 16 and I just started watching and learning. I started doing tires for him when he started running open wheel modifieds.”

Fox is aided in his tire preparation and selection by the fact the fact that he and Owens are first cousins. “We’ve been together for so long that I’ve just come to know his driving style and what tires will work the best when he gets out there.”

Dirt racing surfaces can vary greatly from track to track or even from night to night. Fox says that keeping up with all the variables and relying on every possible source of information are the keys in this ever changing process.

“You go off of past experience and you go off of tire temperature from the last heat race,” he said. “And everybody keeps an eye on those consi cars, everybody goes over and checks their tires out. Then you just watch the track, watch it dry out.” 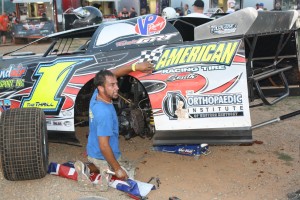 Shawn Gage has worked with driver Vic Hill for six years. In that time, he has developed an understanding of how important tire selection can be.

“Tires are the most important aspect of winning or losing,” Gage declared. “Yes, there are parts failures and and other things that can go wrong for you that you can’t always control. But when you drive through that gate on a Saturday night, the decision you make on tires is the determining factor when it comes to winning and losing.

“As a crew guy, you’ve got to convince your driver that you can make the right choices and give him the confidence that you know what tires to put on,” he added. “Most of the time, it’s the driver who will make or lose money based on that decision, so you’ve got to get it right for him to trust you.”

Gage says that having an experienced driver who can provide feedback is essential to a team’s success. Without feedback such as he receives from Hill, the pressure of tire selection falls squarely on the crew members. “Some of these drivers today are so young that they don’t really understand tires and how to choose. That’s where a crew guy who has been with that car all week and who pays attention to the track and to what the tires look like after hot laps can make a difference.”

Some drivers can be very hard on tires and other equipment. Gage counts himself lucky that his driver is one of the best when it comes to tire management during a race. And that ability to manage can provide an advantage.

“The driver’s style is something you have to understand as a crew guy,” Gage explained. “Some drivers like Vic or Billy(Ogle) can run a softer tire because they aren’t going to rip them up. Other drivers are going to shred their tires pretty quick if you go too soft. But one key is to get in that driver’s head and have him know that you’ve got him on the right tires.”

Like Fox, Gage keeps tabs on track conditions and the tires that come off of other cars as well.

“Where you’re going is one of the biggest things you’re going to take into consideration,” he said. “Whether a track is usually soft and muddy or hard and slick is important. Like when we go down to Screven, we won’t run the same type tires we run up here. Knowing what to expect from the track will determine your setup for when the car first goes out on the track, then you can adjust from there.

“You look off the other guys there to see what they’re doing and what kind of wear they’re getting, but you’re not there to run their setups and that driver isn’t your driver. I’d say what others are doing might go about 5% into your choice, but it always helps to pay attention.” 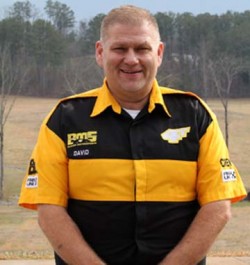 David Bryant has the somewhat unique task of preparing cars for two drivers. The Blount Motorsports team fields cars for Billy Ogle, Jr. and Tommy Kerr. And each has his own style, which calls for different setups and tire selections.

“With our two drivers, we might send them out on completely different tires because their driving styles are so different,” Bryant explained. “They might still wind up first and second, but you have to allow for those differences.”

Bryant relies heavily on his experience when making his choices.

“Most of it is done by vision, I think,” the veteran crew member said of his methods for tire selection. “And you get in the habit of running certain tires when you’ve raced at a certain place a lot, but you just watch the dirt and check the moisture and make your selection off of that. Really, it’s a make or break kind of deal. It can be the difference between a win and a 10th place run. These cars are really sensitive to being on the right rubber.”

“Some of it is monkey see and monkey do, I guess. But a lot of it is just being willing to take a risk.”

And just like his fellow crew chiefs, knowing the surface that is to be raced on is key for Bryant.

“We’re getting ready to go to Screven next month and we’ll run tires down there that are much softer than what we’re used to. That dirt down there calls for a much softer tire. We’d never ever run tires as soft up here as we’ll use down there, but you have to make changes based on the surface you’ve got to work with. The tires down there are so soft that you have put new ones on from the time you hot lap to the time you qualify because just using them that little bit can make a difference of two-tenths a lap.”

So, you want the responsibility of putting the right tires on a dirt late model before sending your driver out to run a feature race? According to three of east Tennessee’s top crew chiefs, it is a necessity to know your driver, to know the track, and to know the tendencies of each compound of tire.