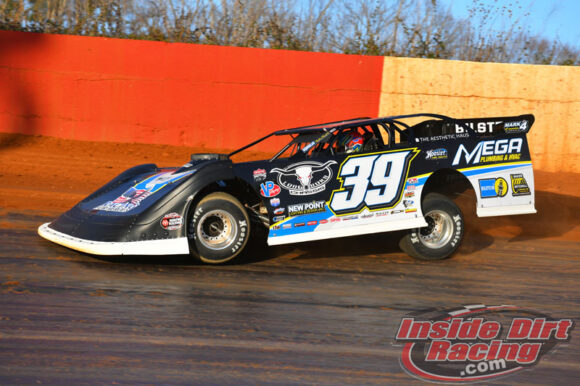 Devin Moran has certainly made it known that he and his new Double Down Motorsports team are going to be a force to reckon with throughout Georgia-Florida SpeedWeeks and beyond by turning in two feature winning performances in the opening nights of the World of Outlaws CASE Construction Late Model Series-sanctioned Sunshine Nationals at Volusia Speedway Park.

McCreadie and his Paylor Motorsports team came out of the gate strong on Thursday evening to open his 2023 season by qualifying second in Group B then winning the fourth heat race of the night. Following that success, the World of Outlaws redraw placed the No. 39 Longhorn Chassis on the pole for the 25-lap main event.

‘T-Mac’ got off to a good start by leading the first 19 laps of the race. Eventually, though, Moran was able to track him down in traffic and make the race winning pass on lap 20.

McCreadie lamented his team’s tire choice during his post-race interview with DirtVision.com.

The veteran racer tried to compensate for his softer tire by adjusting his driving style but Moran was ultimately able to get by. 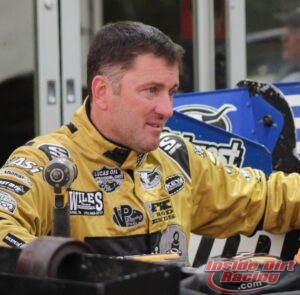 “You can sometimes get a little neutral getting in so you don’t lose the right front in mid-corner,” he explained. “I tried throwing it in harder and harder and it just made it worse. Hats off to them guys. We’ve just got to keep doing what we’re doing, we had a really fast race car. This was a brand new Longhorn, first time out of the gate this weekend with it and it shows a lot of speed.”

On Friday, McCreadie was again solid during the early part of the night. He set the fourth fastest time in Group A qualifying then finished second to Chris Madden in the first heat race which placed him seventh on the starting grid for the feature.

The 2006 World of Outlaws Late Model Series champion then began a hard charge toward the front once the 25-lap feature got underway. A lap 8 restart proved to be a determining factor for McCreadie as both he and Madden were able to pass Kyle Strickler then fall in behind Max Blair as those cars battled for top-5 positions.

Madden and McCreadie moved around Blair on lap 13, but by that time, Moran had gotten to the race lead and was in the process of pulling away. McCreadie got by Madden then Nick Hoffman to assume the third position as the laps clicked off. He then passed Ricky Thornton Jr. to grab the runner-up spot with just over one lap remaining.

“We were good from the drop,” McCreadie declared in his post-race interview. “It’s tough. Out of the top cars that have been here this week, two of them were in the same heat- me and Chris- and he knows what he’s doing. We had a little bit better car than him but he beat me into one(in the heat race) and that started us mid-pack.”

McCreadie then had to spend the remainder of his night working to overcome his seventh starting position.

“I had a bad restart when Strickler and them had a little issue off of four,” he pointed out. “If I could have been in Blair’s spot, who knows. But it put me back a full row and it took me a little while to get by him but the car was really good. I think we were way better tonight than we were last night. Unfortunately we’re in the same (finishing)spot. But it’s really cool. This place was racy tonight, the track guys did a phenomenal job. This is what makes us shine when we see slick. Hopefully they can keep it more like this the rest of the week. It was just a ton of fun to race.”

While McCreadie has been very good so far, one driver has gotten the better of him during these first two feature races at Volusia but another 46 drivers have not been as good as him so far. Perhaps that’s a source of frustration for someone who has had so much success during his career or perhaps it’s satisfying to start of the season on a strong note.

Either way, he and the other competitors in the race track’s grounds will conclude their weekend on Saturday night in the $20,000-to-win Sunshine Nationals finale.