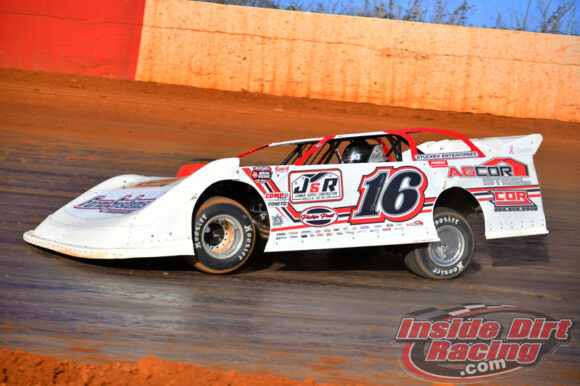 Sam Seawright was the feature winner at Boyd’s

The Schaeffer’s Oil Southern Nationals entered its home stretch on Thursday night when drivers and teams made their way to the Boyd’s Speedway. At the end of a rough and high speed night of racing it was Sam Seawright who emerged as the winner. The 17-year-old Fort Payne, Alabama driver earned $4,053 for his efforts.

A total of 32 cars were signed in for competition.

Donald McIntosh was fastest in Group A qualifying with a mark of 14.141 seconds around the third-mile clay oval to beat out Cody Overton, Jensen Ford, Stacy Boles and Corey Roulette.

The top-5 from each group were locked into the feature.

At the start of the 40-lap main event it was McIntosh who bolted to the early lead with McDowell, Seawright, Overton and Smith in his tire tracks. McDowell moved in to offer a strong challenge for the lead on lap 3 but McIntosh was able to hold back the Hall of Fame driver’s advances.

The leaders found slower traffic early on in the feature as the rough track surface tested both the drivers and their machines. As the top-3 of McIntosh, McDowell and Seawright kept each other in check, the trio of Smith, Hedgecock and Frame were engaged in a hotly contested battle for positions 5-7.

The first caution flag of the night waved for Josh Walker on lap 12. Soon after the action resumed, Frame wrested the fifth spot away from Smith. Further ahead, Seawright made his first big move of the night when he moved around McDowell on the high side at lap 14.

One lap later, Seawright would go back to the top side of the track to roar past McIntosh to stake claim to the race lead. But his rivals did not give up easily as McIntosh and McDowell stayed close tot he rear spoiler of the young front runner.

During the race’s second half, traffic would again become a factor as Seawright was able to hold his challenges back by slipping through the lapped cars efficiently.

With less than 10 laps remaining it seemed as if Seawright had victory in hand with the only real fight on the track being between Frame and Overton at the back of the top-5. However, a yellow flag for the spinning car of Corey Roulette with just three laps remaining provided the other contenders with one last shot at the leader.

But in the end, Seawright was up for the challenge and sailed under the checkered flag to earn his first Southern Nationals trophy.