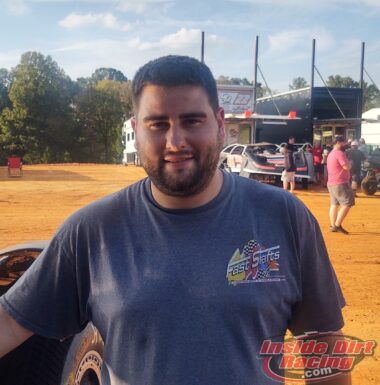 Late last year, Ryan Gustin made the decision to take his show on the road. The 30-year-old racer from Marshalltown, Iowa indicated his intention to race full time with the World of Outlaws Morton Buildings Late Model Series and compete for ‘Rookie of the Year’ honors during the 2021 season. And with the season approaching its conclusion, the former Modified ace has had the opportunity to look back on his first national touring series venture in Late Model racing.

Gustin currently sits sixth in the World of Outlaws Late Model Series standings with nine top-5 and 21 top-10 finishes to his credit. Those numbers place him second in the Rookie standings.

“It’s had its ups and downs to say the least,” he explained in an interview with InsideDirtRacing.com. “It’s definitely a lot harder than anything we’ve done before, we had done some Late Model racing but nothing like this. You learn a lot, there ain’t no doubt. It’s not a regional race out here, it’s the best of the best every night. You’re going to get your butt kicked sometimes, but when you run good, it’s very rewarding.”

The multiple-time USMTS champion who has won more than 100 Modified features over the course of his career says that the competition level with his current series is among the toughest he has ever experienced. Not only does he have to go against the WoO regulars on a weekly basis but the races involving that series also draw in the top regional stars within the area of the host track.

For example, this past weekend’s event at the Cherokee Speedway in Gaffney, South Carolina drew the likes of Ross Bailes, Chris Ferguson and eventual feature winner Brandon Overton to take on the tour regulars.

“No, there’s never a break especially when you get down in the Southeast,” Gustin replied when asked about the fact that the competition never lets up. “There’s a lot of good regional cars, you’ve got Ferguson and some of them guys that are really good on the race tracks they race on all the time. You’ve got Overton who has won about everything this year. There’s never any easy ones on the World of Outlaws tour, there’s no night when it’s any easier to win than the next.”

So why make the move from being a highly successful Modified driver to Late Model racing?

“It’s just what we had been wanting to do,” Gustin declared. “It’s what everybody wants to do ultimately if you’re racing any kind of dirt car, you either want to run Sprint Cars or Late Models in my opinion. This is what we do so we decided it was time to give it a shot. Modified is kind of a stepping stone to get to the Late Models in my opinion. Like I said, if you’re a dirt racer and you’re racing anything you either want to race World of Outlaws Sprint Cars, World of Outlaws Late Models, or Lucas Oil, or something like that.”

Making that switch over the past few years has been an adjustment. Not only is the competition at the national level of Late Model racing intense but the cars themselves are also challenging.

“It’s tough,” Gustin said. “The Modifieds are getting more technical but they’re not near as technical as what these cars are. With a Modified car, if you get it relatively close you can drive around some of the imperfections. With these cars, if you’re not right on point you don’t have a shot at it and that’s all there is to it. It don’t matter how good you are, if your stuff is off, you’re off.” 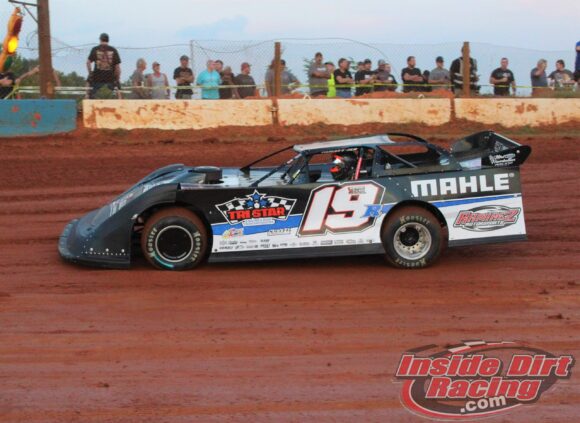 Ryan Gustin aboard his No. 19R Rocket XR1 Chassis

Another element to get used to when travelling to race far from home is the track surfaces. Having cut his racing teeth on the black clay of the upper Midwest, “The Reaper” has had to adjust his driving style when visiting other parts of the country.

“It’s a lot different, especially down here in this region because the dirt is nothing like what we have at home,” he pointed out. “It’s definitely a different mentality. You have to get used to the wheels spinning through the sandy type dirt, which obviously, there’s a lot of down here. Up home, it’s all black and slick and wheel spin on that is bad but down here wheel spin is kind of a good thing. It definitely takes a little to get used to just hammering the gas even when you’re spinning the tires.”

All in all, Gustin gives himself mixed reviews in terms of how his rookie season on the World of Outlaws Morton Buildings Late Model Season has gone.

“I’d say as far as our performance as a team, I would give us an A- or B probably. As far as the way the season has actually been probably more like a C just because of the failures we’ve had of equipment and stuff like that.”