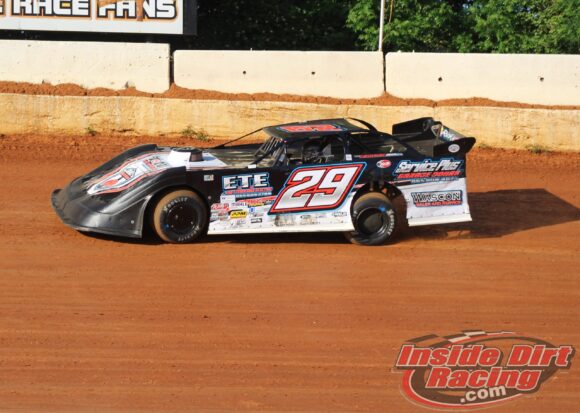 Rusty Ballenger led all 25 laps for the win

As part of the Scott Sexton Memorial on Monday evening, the 411 Motor Speedway hosted the Super Late Model division in a Spring Nationals/Iron-Man Late Model Series co-sanctioned event and the 604 Crate Late Model class was in action. When the dust had settled from that feature, it was Seymour, TN driver Rusty Ballenger who was awarded the winner’s trophy.

At the start of the 25-lap feature Ballenger went to the early lead with Beets, Henderson, Lowe, and Ahl trailing. Beets closed in on Ballenger to contest the lead on lap 3 while Lowe began to harass Henderson for third.

By lap 9, Ballenger and Beets found themselves fighting among slower traffic.

The top-5 of Ballenger, Beets, Henderson, Lowe and Ahl ran in single-file formation as Hedgecock and Brooks closed in from the sixth and seventh positions.

Ballenger appeared to have everything in hand until Ahl spun from the fifth position on lap 24 with Heath Alvey being collected in the mishap. The No. 7 car was placed back in his position as track officials determined that he was not the cause of the yellow flag.

Ballenger maintained control of the race following the return to green flag racing and eventually cruised under the checkered flag for the win.